This article is something of a departure. As I’ve branched out into photographic arenas, I have been travelling more too. The technology articles are one part of a larger sphere of interest here, and I hope you enjoy this review of the WOW Airline experience. I travelled on WOW air from Toronto (YYZ) Canada to Keflavik (KEF) Iceland from November 23rd, 2016 to November 30th, 2016. The trip included a number of purchased amenities and a flight change. What follows are my experiences with this new-ish low-cost airline. Note: WOW airlines ceased operations on March 28, 2019. What follows are my experiences with that airline.

Shortly after this article was written, Wow has quietly changed their already crazy baggage allowance. They have gone from allowing a bag and a small purse free to simply one small bag. If you’re taking a trip of more than two days, these kinds of bag restrictions are going to be impossible to work with or force you to pay for bags – which in many cases may double the cost of your flight. But more than anything, it’s just going to piss you off. It just pisses me off thinking about it (while I ready for a trip with them). I’m about to pay for a carry-on because I feel forced to do so. There is simply not much to recommend Wow airlines by with the multitude of shady fees and gouging baggage rules. Skip them.

Dear Kevin, we changed our hand luggage policy in January. Now is included in your airfare one personal item which can be a… 1/3

But, yes, on to my thoughts on the airline when they were better.

And for WOW, you really need to prepare.  Your cheap ticket means an entire host of pain if you leave this step out. Knowing the carry-on baggage allowance was more strict than usual, I was going to need prep time. My usual Roots Leather Banff Bag weighs 3.2 pounds empty, and with the 22 pounds allowance, this would need to be cut down. I opted for my 1.2 pound Herschel canvas bag to reduce the weight. The next steps involved cutting out any and all unnecessary things to travel with. At a planned 6 days in Iceland, the result was a mostly inhumane process, but I was not planning to give WOW air money for more bags. Couple this with my plan to take camera gear and the packing process was going to need to be ruthless.

Some other notes:
– I was early for this flight, and it was delayed, that was a bummer.
– Looking online at the wowair.ca site while I was at the airport there was a “Check-In” button but clicking it did nothing. I also noticed seat selection is greyed out.
– At Terminal 3 in Toronto, WOW reuses counters from other airlines and has no check-in kiosks. It seemed clear that I would be going to need to go through a person at the counter. I’m here an hour before typical check-in and no one from WOW is here and no one is lining up.

Getting to YYZ, I was cautiously excited about the results of my preparation. Would it help? Would it still be a painful process? Would they allow me on with my second (personal) bag? As I’m waiting in line, the counter attendants were checking bag sizes by way of a large purple metal bin (monster). It had two spaces, one for the free allotment of a bag, and a larger, paid size (before presumably sending you to check your bag).  People with rolling bags were almost universally forced to pay more or check a bag. This was so widespread that delays were holding up a very short line.

My bag was passed, mainly because it is a duffel bag; those that arrived with a duffle bag oversized (as mine was lengthwise) were able to squeeze the bags into the purple monster earning a “free” tag. 1

Some other notes:
– Many were in line very early, which was smart.
– Backpackers were also forced to check and pay for bags as backpacks clearly would not fit into the purple monster.
– I avoided the weigh-in by placing my bag inconspicuously on the rail between the scale and the counter. Since the attendant didn’t ask, I didn’t offer. I know my bag was at 18 pounds (with the allowance at 22 pounds), but I wasn’t going to test the scale’s accuracy.
– I asked for a better seat and was given an aisle seat. Not clear where this is on the plane, but three days before my flight time I checked the seat map and the plane seemed open. I will attempt a relocation once on the plane. Once there, the plane was full.

Now on the plane, I was greeted with purple everywhere. The floor is purple, the plane is purple and the attendant’s uniforms are purple. Prince would have loved this airline. Truly no-frills, WOW offers no free drinks, no snacks and no in-flight entertainment, no WiFi options, and no charging ports. For this reason, bring books, videos and a player to keep you occupied. Bring or buy snack snacks if you can. Once inside the plane, WOW’s strict baggage rules melted away for the easy-going helpful service from the attendants trying to get all bags in. They clearly seemed to have the “We’ll work with what we’ve got” approach to our bags.

People are packed into these planes too, but it felt like the aisle was few inches wider than usual. This gave me some space for my knees and legs when the cart wasn’t bashing into them. I can say, I was happy that my legs fit, though when the inattentive person in front of me reclined – that was still incredibly painful. 2

Some other notes:
– The planes are all one class: Economy. I have to think this is a good idea. There wasn’t a special group who would get more service because they paid more.
– This plane’s outside marking was TF-MOM (get it? WOW upside down). My return flight featured a marking of TF-DAD.

On November 25th, 2016 I realized an early return was required, so I started the flight change process.  Since there was  (update from WOW on Twitter, there is actually a mobile app, I just didn’t find it),  and my computer was out of commission, I attempted to use the mobile site for the flight change. The site’s layout was so poor, that it was impossible (buttons were off the screen, scrolling failed). Couple that with impossible to remove charges, and numbers that made no sense, I was forced to call WOW air.

Given that my current SIM card was data-only, I needed to use a local calling app,  Fongo,  to get in touch with the airline and sort things out. The process was far more difficult than it should have been. And ultimately, I would pay more for the flight change than the initial flight itself. WOW Air seemed ill-equipped to handle this process in an automated fashion, and worse at explaining changes.

Some other notes:
– Since I previously reserved a seat for $12.99, my flight change wiped that out. The person I spoke to said the seat cost would be returned “automatically”, but there was no indication that it was refunded or credited.
– The seat I had reserved before (row 11, exit seat) had more legroom and was cheaper than the one I would later reserve with less legroom.

Getting back to the airport and dropping off the rental car was a painless process. 3 To leave KEF, there was something different about customs. I found myself going through a sort of screening, and then in an open area thinking I was done – but I needed my passport stamped, so I had to get there before I went to the gate. Thankfully, that process was very quick, or I would have been late for my flight. My general impression of Keflavík International Airport is it’s confusing. Signage is not clear, maps lack details, and the airport does not allocate space well for gates. They do, however, force you through Duty-Free twice. 4 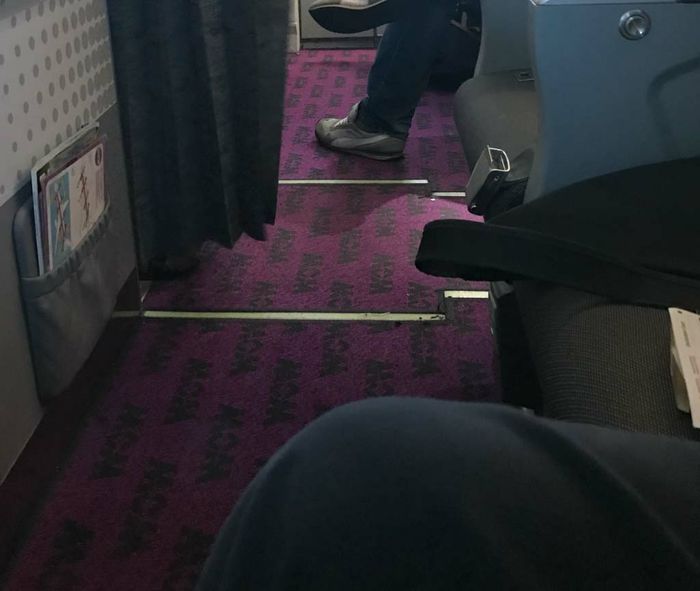 Some other notes:
– The purple monster was also used at KEF airport, be warned
– Reports of attendants not allowing a personal bag are unfounded. My small bag was fine, and I didn’t see anyone get turned away.
– The baggage tag I picked up in Toronto was useful in convincing the attendant not to dump the bag in the purple monster.
– WOW Air appeared to be relegated to a shared counter with airlines from Asia. While I was there, construction was occurring and I.T. was on site. They may have taken down some of the computers, slowing the process.
– The customs process and passport stamp were very quick and simple. The customs official in Iceland said hello and goodbye.
– Wifi at the Reykjavik airport is free and they request your full name, email, nationality, and mode of transit to connect. The connection is slow here (sub-5mbs download), but the speed feels good – probably due to low latency.

The experience with WOW Air is as no-frills as it gets. If you plan on flying for more than 5 hours in a sardine can, this is not exactly an enjoyable experience, but perhaps not the worst way to do it. The people I encountered along my trip were pleasant and, for the most part, dealing with much of the same pain we are. If you ask me whether I would fly WOW again, I would say yes. We need more of these low-cost air options, and we need them to be better at what they do. WOW appears to have much to learn, and my hope is that they survive long enough to do that. The nickel-and-diming of customers only creates frustration.