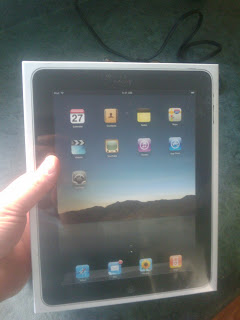 As one of the few Canadians who have had the chance to see and use and iPad, I felt honored to have it finally in my hands. This device will not be available here in Toronto until sometime in May – so imagine my joy at getting to play now. I really wanted to see what the hype was all about. I had heard and seen many reports – but for many, the mantra had been “You have to see it and touch it to understand how amazing it is”. So, today, I will do that.

As I looked at the box and opened it up – I wasn’t really sure how big the iPad would be or even how it might feel. I picked it up out of the box and the size was actually perfect. A few years ago when I was in Panama using an iPod touch to get email and browse the web – this would have been incredible to have. I was also surprised at how heavy the iPad is – by no means is it a lead weight, but I thought it would be lighter before I picked it up. It didn’t seem that I’d get away with holding the iPad in one hand  and browsing pages with another, we shall see. As shipped , the iPad is covered in plastic. I can just tell right away this thing is going to be a fingerprint magnet.

When you first get the iPad, you’re required to plug it into a computer with iTunes running on it. When you plug it in, nothing really happens with either side – but then the iPad is unlocked and can be used. When I connected the very straightforward USB cable to my Toshiba Tecra M2 notebook via USB cable, the iPad displayed a message “Not Charging” at the top-right of the screen. I suspect many folks with PCs will get that same message.

Holding it is truly quite awesome – one of the first things I did was connect to a wireless network and go see a movie trailer in HD. All I can say is wow, incredible. I wanted to install an application but that was going to require an Apple ID so I skipped that process. Given the lack of apps, the best I can do with this now is going to pretty-much be browsing.

I took a look at Google’s new interface for Gmail  and actually went to the Google Books site to view some books. I found the iPad to be incredibly responsive to the touch gestures and the interface of viewing a magazine in Google Books was incredible.

The next thing to try was the much-lauded soft keyboard. I decided to open the Google Blogger interface and try to type a paragraph or more with the iPad on my lap. I’m happy to say that this is the best touch screen keyboard I have ever tried and might even be better than a real keyboard. I like at the iPad is correcting my words as I go too. The keyboard aside, there are problems here. The posture when typing on this keyboard is all wrong. If I don’t have my legs elevated above my hips, I’m either going to have to lean forward and my back will hurt – or lean back and get a view of the screen that is not so easy to see. The real kicker though, is if your legs managed to end up below your hips and the iPad happens to lean forward – you’ll see the iPad’s screen flip upside down! I should note that one of the outside buttons on the frame locks the accelerometer – so this annoyance can be stopped. Occasionally too, I would accidentally hit outside of the keyboard area and the keyboard would vanish.

I then moved the iPad to the desk and leaned it up against the edge of a laptop and typing was great. I suspect many will have trouble with posture and ergonomics with this device because it really does push bad-posture to higher-than-laptop levels. The lack of an arrow key was a little weird too – but I got used to it and managed to make the touch interface work for me.

I should note too, that the default WYSIWYG editing interface inside of Blogger’s page did not work correctly in the Safari browser. I tended also to notice the lack of flash on a few sites, but it wasn’t a deal-breaker for me. Frankly, I have never thought Safari was a very good browser. I look forward to seeing Chrome or Firefox on the iPad.

I was also keeping an eye on the battery usage, the default indicator just shows a percentage like: “82%” which I really didn’t see falling that fast. Through writing this entire blog, so far I’ve only used 5% of the battery power -Impressive.

Also of interest was the WiFi connection. While writing with this iPad, the WiFi connection was dropped and reconnected a number of times. Was this related to the recent problems with the device, or something else – it’s hard to tell. The problem really became annoying when the iPad would refuse to connect to the router from within the webpage I’m working on – causing me to loose a paragraph of text I was writing. I went into the interface of my Linksys router and dropped the “radio band” from 40mhz to 20mhz and this seemed to improve the wireless reception – I expect more testing would be required to really understand this issue.

Wondrously, I managed to get apps on the iPad! I was excited to get the chance to see some of the cool apps I could find. Since I couldn’t buy anything at this point – all that could be placed on this iPad was free programs. I started by installing Google Earth – this app was actually an iPhone app, so it had to be scaled to fit the entire iPad. It looked great, but I could tell that it was a scaled iPhone app because of some interface pixelation. I went looking for native apps. What I found, wow – these free apps like Reuters Galleries, Marvel Comics, Weather Channel Max, Dragon Dictation, and Air Hockey really show off what this iPad can do. I especially liked the interfaces or the IMDB and BBC News, even though they probably could have done it int a browser like that.

Altogether, this package is impressive. This is really something to feel and use. I can’t help but think that Microsoft is not pleased to see how Apple has taken the tablet and essentially perfected it. When the iPad gets OS v4 and multi-tasking, I don’t see any other device out there that can beat this. As a content consumption device, the iPad is perfect. I can see two of these sitting on my coffee table for guests, and a 3G model for my backpack when I’m on the road.

– I’m pretty sure that is not going to be shippable to Canada, however.

Are you another Canadian iPad user too? Please share your experiences and thoughts on the iPad – a game changer?