Gone from OEM and newly installed computers is the “ugly-duckling” Microsoft Works application. Enter its replacement – Office 2010 Starter Edition. The Starter Edition of Office is intended to be installed on New and OEM computers and is ad-supported. This copy of Office is intended for free use and only includes limited-feature copies of Microsoft Word 2010 and Microsoft Excel 2010. It will run only on Vista SP1 and Windows – with no support for Windows XP. 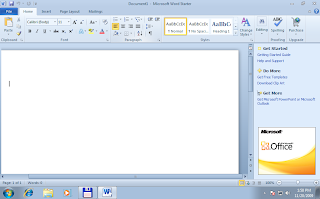 Office Word Starter 2010
The version of Word included is very similar to that of the full version of Word (at first blush) however some of the bigger differences are the lack of programmability, table of contents and being able to track changes of a document. Inf fact, if you look at the File -> Info screen, these limitations are outlined and you are given the option of purchasing the full version of the product. You’ll also notice an advertisement in the bottom right-hand corner of the screen (all the ads I saw were Microsoft Ads). One of the sites linked to (on Microsoft) outline the different versions – the final will likely change.

Of the new (coming) features of Office Word 2010, here’s I’ve noticed as being included:
– Save to Skydrive (Cloud)

I’ve noticed some missing features, these are:
– Reading and Writing To Template files
– Envelopes and Label printing
– Ability to MailMerge
– The ability to include a screen Capture
– The Inclusion of SmartArt? 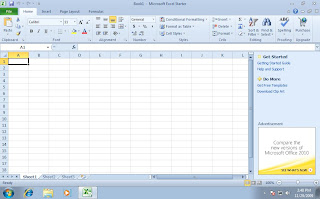 Office Excel Starter 2010
Excel Starter also includes a number of limitations – probably the biggest omission is the ability to create (and or) run macros. in many cases this may be a killer limitation when users need this feature to use files. Other notable differences found – No support for PivotTables, Tracking Changes, frozen panes, and password-protecting files.

Office To-Go
This version of Office also includes a utility named “Microsoft Office To-Go Device Manager” – this application allows users running Windows Vista and Windows 7 the ability to run the office applications from a USB or flash drive regardless of whether they have Office Starter installed on the computer.

Other Stuff
Another noted new feature in use here was something called Click-To-Run – more – this involved streaming (or virtualization) these office applications. The presence of this tech was not clear until I took a closer look. This version of Office Starter may not exactly be how the final version is delivered, but this was a great introduction to the underlying technology involved.

Another interesting thing I noticed, when disconnecting the computer from the network, launching an Office application was painfully slow – possibly due to office Starter phoning home somehow. After a reboot – a clean run from either one of the Starter applications was not possible without an internet connection. This was not greeted by any errors. Office Starter will also not open certain files, .xla, .odc, .udl among them.

Delving Deeper
Looking at the file structure, however, yielded some more interesting bits. There was a directory called:

This clearly indicates some sort of virtualization is going on (or possible). This is possibly the same virtualization framework in use for Microsoft’s APP-V? – More. Starting office required calling the CVH.EXE file – or the “Client Virtualization Handler” – suggesting this entire package is being virtualized.

Another interesting thing found, which indicates Microsoft intends this technology for other office apps. you can change the following registry key:

Change the value of “BitmapId” to a different number (decimal), here are some of the different splash screens you get: 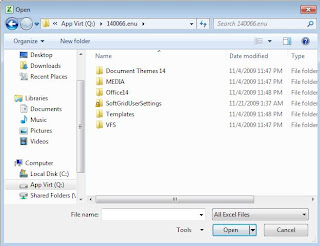 Also, a component of this virtualization was a drive letter that was created from the host to the server. On my test system, this drive was reserved as Q: and used the “AppVirt App FS”. What was interesting was that this drive was exposed only from within the application – not locally on the computer (or client). Getting at it involved going to the “File Open” dialogue, choosing “Computer” and then opening the Q: drive. Clearly, this drive contained all of the office applications (including WINWORDC.EXE, EXCELC.EXE). These files were all contained in a directory named: Q:140066.enu and accounted for about 600mb of files.

Overall the speed of this version of Office was nice – it was also nice to be using the application that should have been included on computers back when the Works application was being installed. The ability to open, edit and save word documents on any computer, for free is a major boost for Microsoft. If they are listening – they should remove any sort of activation/control from this version of Office and allow anyone to use it. Early indications inside of log and help files show mentions of an activation framework.

One other note – this version of office does not include Outlook – Microsoft’s flagship mail client. I think it’s high time Microsoft made a serious play in this market and offered this application free (or a limited edition) free to all who would like to use it. It could greatly complement the recent announcement to open up the Personal Folders files (See more). For more on this, take a look at my own case for a Free Outlook.

Also of note, this version of Office does not expire.