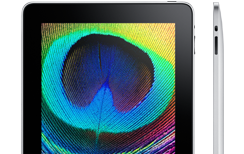 The iPad is due to be unleashed on us Canucks this Friday. Will you be buying one? After my last, short experience with a iPad, I really wanted to get my hands on another one. Having only 24 hours to work with the last time, didn’t give me the time to really sink my teeth into using this thing. This time, I might even have it permanently. In fact, I will type this entire blog on this new iPad to really get a feel for how well the iPad keyboard works and feels.

I have to fess up though, just after I brought the iPad home, I kind of felt that this would become something of a novelty, definitely not a content creation device. My expectation was mostly met. As you get it – the iPad is essentially useless as a content creation device, the power comes from the apps you install. From what I can tell so far there aren’t many free apps that allow you to create content. It’s all swayed towards the consumption of content.

Consumption is really where the iPad shines. As I’m using it more and more, checking out the NPR application, the IMDB application, WeatherBug and some of the many other free apps – coupled with a WiFi connection available all over the house – wow. This is incredible. I really only wish I had two more of these. When folks over to visit, people just tend to be drawn to the iPad.

My two nieces had never seen an iPad, but when they grabbed it and started to mess around – they immediately knew what they had to do. They wanted a game – so I loaded the air hockey game and started it in two player mode. I was impressed, there was the iPad, this new technology never seen by these kids and they were instinctively playing this game as if it was absolutely normal to them. Here is the key power of the iPad: there is absolutely no learning curve to using this. We all know how to touch things. When the touch screen of the iPad, being, so accurate, kids and even those who may not have ever used will take to this thing immediately.

The  amazing Penn, from Penn & Teller seems to have a different take on this. Check out his short video about how he uses his iPad:

He is, of course, entitled to his opinion, but I think he’s totally missing the “Point” about the power of this device. He may have a discipline  problem (who doesn’t), but the iPad has proven to be incredibly versatile. I think this is why the iPad has sold so many in the first month – some reports are more than a million. Sure, this may have been intended, but very few will have said that this would happen for Apple where others have failed.

You may not know, but tablet computing devices have been around for upwards of 15 years. Clearly one of thee bigger failures has been the user interface, Windows (the operating system of earlier tablets) is not as touch screen capable. The iPhone operating system (the same as what’s running in the iPad) was built from the ground up to be touchscreen based – and it succeeds in this regard. The next thing Apple needed to perfect was the keyboard – and I’m happy to report that this keyboard is amazing. It works the way you might expect a real keyboard too – the response from the keys is perfect, with a small sound played each time you hit a button. This, I would say, is the best soft keyboard I have ever used. You do have to be careful not to hit above the top bar of the keyboard though, all sorts of havoc was created by doing this (I prematurely published this article).

I took it even further – venturing out of my home WiFi connection, I stopped at the local Starbucks to give the iPad a chance to connect in the real world. I’m happy to say the connection worked great. While sitting on the table, I decided to prop the iPad up with my wallet, this worked perfectly for getting the iPad into the correct angle required for typing. What I planned next was to use an app named DropBox to view files and books.  The meeting went amazing, while the person I was meeting had never seen an iPad before, the combination of touching the screen and seeing the zooming action made it simple for him to see and interact with my proposal. It was great because we discussed the project, then went back to the document, discussed, went back… This cycle was perfect for two people sitting at a type and going over an idea.

DropBox (iTunes Link) is this great free utility that gives you space in the cloud to use for viewing files on the go. One of the nicer things about DropBox on the iPad, is that it doubles as a viewer for these files. This is really useful when you don’t have any sort of PDF viewer installed (and some of them actually cost money).

With this iPad I’m finding new and interesting ways to use it too. I’ve figured out how to get the full Google Reader interface and am always on the lookout for really cool ways to extend this past just simple browsing and playing games. Everyone I have shown this iPad so far has been impressed. I didn’t think I would be either, but I can’t help it – I still am.

When the iPad finally arrives here in Canada in an official capacity on May 28th, I suspect many more of you will have your hands on this great device. I haven’t seen a causal iPad user yet – but I have met at least 10-15 people in the last few weeks that tell me they’ll be buying one. If you have any experiences to share about your new iPad, I would love to hear about it.

Also, those looking to buy an iPad in Canada can do so now.