The recent flood of Android-based smartphones and tablets is starting to really pay off for Google. Thanks to this, we are seeing a large number of devices that may not exactly fit the Android use-case, but are nonetheless interesting. I have recently been very interested in the Android tablet and/or Netbook scenario. Why is this more interesting than ChromeOS or some other Operating System? Android has a much more streamlined use, it’s much faster than that its Windows counterpart, and since ChromeOS isn’t exactly ready today – some may turn to Android. But, is it ready? How well does it work? I will install Android on an older Acer Aspire One netbook to see how well it runs over Windows XP.

You may have seen HowToGeeks wonderful article on how to run Android on your PC or netbook – you can choose to follow those instructions or just simply boot Android from the live CD (downloaded as an ISO file). There are any number of scenarios you can follow – in my case I decided to install Android onto an SSD-equipped netbook. Here are the specs of the netbook I was using. After installation, I used it for a little while take a look at how well it runs (View this full-screen in HD for best results):

Installation
Since I wanted to install to disk (the fastest possible use) – I booted off the live CD and chose the “Install Android-x86 to harddisk” option (see below). 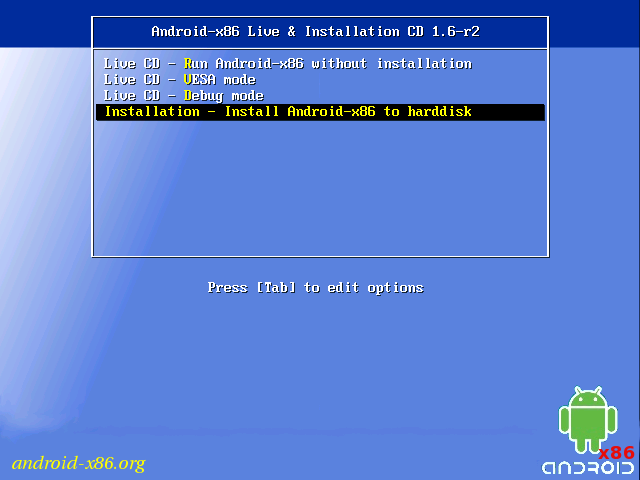 You’ll go through a number of steps, but the process of installing did not seem to be able to remove the current FAT32 partition and create a bootable Linux partition. I ended up using partition manager external to the installer to clean the drive and then install Android. Be sure to install the GRUB loader too.

Android – The Positives
1. Speed – over that of the Operating System pre-loaded on this computer  (Windows XP Home with driver enhancements), this version of Android booted faster, ran applications faster, closed applications faster. All around, everything ran much faster while using Android.

2. Device support – for the most part, I was very impressed with the the device support on first boot. I found that *most* of the devices on the system worked well, and even connecting a USB mouse worked well. Read more about some of the problems I had with devices in the negatives below.

3. The browser – the default mode of the browser may be to render sites as mobile, but the browser itself ran smoothly and quickly. It looks amazing on the 8.9 inch screen.

4. Mouse handling – a nice surprise, using a mouse on this version of android was nice. It will take you a bit of time to get used to it, but when you do, it works well.

Android – The Negatives
1. Lack of Device Support – the bad side of device support is that there tends to be one or two devices not supported. No matter what I did, I could not get either of the two SDcard slots working on this netbook. Also, the very troublesome Atheros AR5BXB63 wireless chip set would work for a while, disconnect and then not run again until a full reboot occurred. At one point, attempting to get the Atheros card working caused Android to reboot outright. When I did get the wireless card working, the wireless activity light on the outside of the Netbook didn’t work even once.

2. No Market Application – This version of Android oddly omits the standard Market application in favor the AndAppStore client. Based on this seemingly filter list of applications, many of utilities i use on my own T-Mobile G1 were missing.

3. Very SD-Centric – for example, to use the picture application, an SD car is required. Given that I could not use either of the available SD card slots because of driver issues – this rendered the photo and video applications useless. Somewhat more of a failure is that the photo/camcorder applications were able to load and make use of the netbook’s built-in webcam. Also a problem, there seemed to be no way to store data on the local (non SD card) drive.

4. No video support – Probably much worse than the previous negatives – this version of Android includes no support for Youtube videos or any other video support, for that matter.

5. No Flash support – This is not so much a negative, as it is just missing. This particular version of Android likely will never have flash support, further stifling the use of this operating system as a web browsing tool.

Is it ready?
In a word, No. This has some great potential as a great browsing operating system, as well as being able to turn older devices and netbook into much faster computers. The core theory of what Android-x86 represents is perfect and I would take it in a second. Considering the number o things that don’t work yet, however, you’ll have to pass on this until more application and device support comes along. if they are able to port Froyo with Flash – this would be a killer replacement for Windows XP on this netbook. As it is, I can’t use it – so back to XP I must go.

Update: I should have mentioned – the live CD/ISO will run inside of your virtual machine application. I have tested it in Vmware Workstation.