Broken Telephone. You’ve heard of that before right? When one person tells a story and the next person re-tells that same story, parts of it change. By the time many people have told the story – the most recent version you hear bears little or no resemblance to the original. You can certainly blame this on creative storytelling – but it’s clear that there is something very human about getting things wrong. With the Internet, the broken telephone is taking on a new life with details outright changed or removed.

If you’re a Twitter user, you will have no doubt heard of the recent Back To The Future tweet – this is how it came up in my stream:

Now, I vaguely remember the part in the first movie where he sets the clock. What’s more, I remember in the beginning of the movie Doc Brown does talk about going 25 years into the future. Like a good little Twitter user, I re-tweeted he above. Notice, also, @hexsteph refers to the Doc as “Doc Scott”.

More than that, @totalfilm supplied a picture on Twitpic that gave the proof that the above tweet was correct. The picture they provided was: 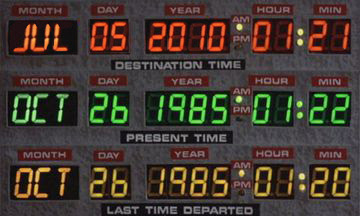 If you opened the Twitpic site, you would see that this was a hoax, thanks to a disclaimer under the image “We got it wrong. Apparently 5th July 2010 isn’t mentioned in Back To The Future. So we went back and changed it…”

Truth is, this easily confused folks. If you look at the first Back To The Future’s script, you’ll find that Doc Brown says: “That’s right, twenty five years into the future. I’ve always dreamed on seeing the future, looking beyond my years, seeing the progress of mankind. I’ll also be able to see who wins the next twenty-five world series. ” And apparently there is a moment when you see the time clock shown above, but with the Destination Time set to Oct of 2010.

Broken Telephone
The damage was done, however. The @totalfim account has close to 30,000 followers, many of them started to re-tweet the above, write their own versions of the tweet and carry on. Later that same day this would become a trending topic on Twitter and end up being re-tweeted by the likes of Elizabeth Banks. As the tweet passed through a number of people, you can even see facts in the original tweet changing (IE changing from “Great Scott” to “Doc Scott”).

What’s going on?
What I have started to see is that the nature of Social Media and electronic communications is starting to create a new set of circumstances around passing messages. The old-style of broken telephone is taking on new set of rules as it passes through the various social media sites like Twitter. The basic human need to pass on information in our own way still persists, but with the original information so hard to get to (or so far removed) the true nature of this data is hard or impossible to get at. As it passes through people, vital details are being changed.  Take this example I found today on Twitter, here Internet broken telephone is removing vital data.

1. Annie Colbert tweets something that brings “Wayne’s World” to mind:

2. This takes you to a small post on her blog with an image of what looks like Wayne and Garth in Google Street view. What you see is an image (and not embedded Google Maps). Below the image is a link to Huffington Post.

3. Opening the above Huffington Post link to see more information as to the location (as well as a Google Maps link), you are taken to a page on huffingtonpost.com that contains slightly more text but also just a picture, and a link to The High Definite below the image. The image appears to be the same as the one that was on Annie Colbert’s page.

4. Opening the link to The High Definite yields the third new browser window and possibly the end of our route. This page contains the least information wrapped around the image, and it also has a link to the actual Google Maps location where this sighting of Wayne and Garth took place.

If you are interested in exploring the actual Google Maps location pictured above, you would get to see the building being these guys is apparently Plymouth High School in UK and these guys may have been doing some sort of  play or show at school. You might decide to explore more and see the folks across the street gawking that these guys. Furthermore, seeing that  The High Definite might have been the source – you could explore their site for more sightings? Perhaps there you could explore more?

Although none of the facts changed in the above example, the second effect of broken telephone becomes apparent. As useful information passes through a number of sites and is written about (or as some say curated), details about that information disappears. In the above case of Wayne and Garth, when presented from @anniecolbert, there is no link to the beginning source, nor is there a link to Google Maps. You must accept the information she provides or go through a process of opening three (or more) links to get to the source.

What’s the problem?
As we continue to make use of links and social media it becomes clear that those providing us with new takes on information are going to need to be diligent about citing original sources. When the information passes through so many hands and is either changed or outright removed – we, as the audience, are placed in the position of not seeing the entire story and possibly making decisions based on part of the information. These decisions can lead to bad things (my stupidly re-tweeting a hoax).

Improving this process could mean some drastic changes – can you see a day when blogging sites such as Posterous or WordPress force you to include and cite original sources? Can you see the possible inclusion of a “source” link below all tweets that include short URLs? It may seem far fetched, but changes like this could be just around the corner.