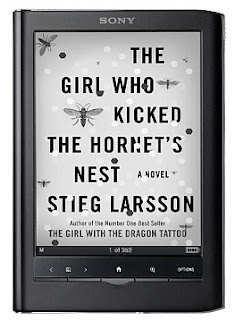 After having an iPad and writing about it a number of times and ultimately writing about why I sold it – I had managed to spend allot of time understanding how I wanted to read eBooks. While reading eBooks was a great experience on the iPad – reading PDF files such as online printouts and magazines – was even more amazing. After this, however, I was looking for a new way to read, one that would not use a back-lit or illuminated screen. This lead me to the eReader product offered by Sony, the PRS-650. Here are my thoughts.

Using the eReader
Since this is intended for reading books primary – the process of reading is key to this device. I’m happy to say that it works fast enough not to disrupt the process of reading books. When you switch pages, the screen does a flash (in negative) and then re-writes the section you’re reading. This process is not nearly as annoying as you might think.

You have two options to move to the next page, you can use the buttons provided on the left to move forward and backward, or you can swipe with your finger on the screen to move pages. The buttons  work as advertised, but you tend to stop using the buttons in favor of the swipe. The manual says you need to swipe from the right side of the screen to the left to get pages to advance. In practice, this works rather well. However, when you are not covering enough of the screen with your finger – the reader sometimes goes in the wrong direction. Included with the reader is also a stylus that can do the same things.

Using other touch-screen related functions such as bookmarking and dictionary search work for the most part – but with big fingers, you may find this process frustrating.

Reading in Black & White
You would think this is a problem, right? Well, I’m happy to say that while reading magazines and parts of books -so far I can spend more time reading with the PRS-650 that I was with the iPad. It may be due to a couple things:

1. The iPad’s illuminated screen causes quite a bit of eye strain to look at, seriously limiting the time you can look at it
2. The weight plays a role in this too. I find that the smaller PRS-650 is easier to handle and work with – making the reading experience, especially in bed, much easier.

When looking at stuff that would normally be in color, it doesn’t look as good – but it’s not as bad as you might think. For example, here is what the cover of the novel The Thorn Birds looks like in color (left) and in black and white (right). The look is very much readable and even the shades (such as the object around “25th Anniversary Edition”) are handled quite nicely. 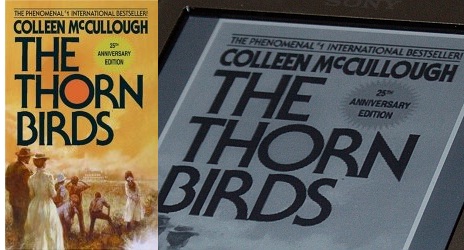 Reading PDFs on the PRS-650
In two words: “it sucks”. You’ll find that if the PDF layout is not mainly text, that you’re at the mercy of the text size chosen by the creator. You do have a few zoom options, but you won’t do that when you have to open the interface for each and every page. Here’s a good video on what reading PDFs look like.

Charging and Power Management
This device was charged in an unusual way. It had to be plugged into a USB port to be charged, there was no wall outlet option for the device. The charging cable provided is a USB to mini-dsub, similar to what you find with newer Blackberry devices. Charging the device was quite fast, however. Considering I haven’t nearly given this reader long enough to drain the battery – I can’t say how long the battery lasts – but so far after having it running all day today, the battery barely budged. Also, if you are looking for a wall charger option – you could use the standard Blackberry Travel charger (Wall jack with a USB port) to charge this thing.

One gripe I have about this device is that when you hit the power button (a swipe of a button on the top-left of the device), the PRS-650 goes into a “sleep mode” that effectively places a picture on the screen as well as a message explaining how to get the device out of this mode. This is the default setting and can be adjusted. The problem with this, is that this mode would likely drain the battery.

UPDATE: I do mis-characterize this process as a “drain” – in fact the power usage in standby mode would be negligible. The process of shutting off the device requires you swipe the top-left “power” button and hold it. This process could be improved greatly.

Also – Music Playback
Yes, the PRS-650 does play music. While the eReader does not come with any sort of speakers (nor do they supply headphones), you will find the music playback to be quite capable. I was impressed by the fact that Sony took the time to make sure album art displayed nicely. Using the music playback feature for playing audio books or even just music works well. The audio jack and volume buttons are located on the bottom of the device.

So, there you have it, the Sony PRS-650 is a pretty-good all round eBook reader and definitely small enough and light enough to keep with you all the time. You may not find allot of functions with this device, but that’s a good thing – you’ll get to what you bought it for – reading books. The long battery life will allow you to take the reader for a two week trip and have more than enough reading material (with an 8gb SD Card) to last for two months! Do you have something you use to read electronically? Share your thoughts!