Twenty-Ten will go down in history as much more than ending the first decade of this new millennium. This year we saw the leaking of copious amounts of oil, WikiLeaks: leaking copious amounts of government data and a massive earthquake damage in Haiti. 2010 will also be remembered for all of the amazing and interesting technology news – from the introduction of the iPad, to the nuances of privacy, to the rise of Android (and fall of RIM), to the domination by Facebook of practically every form of media (Howard Stern beware). Join me as I take a look at the big stories of 2010.

.. in Canada
The caveat with all new an interesting technology these days, is that is usually gets released somewhere else first. This year was no different. We had to wait for, but eventually got the iPad and iBooks. We still didn’t get  most of the movies on Youtube.com/Movies, however. This year saw the release of Netflix in Canada with very little selection and even less fanfare. Some stuff, however, was our own. We got the some of the best online Winter Olympics coverage (it was free too) and even a 3D broadcast of Hockey Night in Canada. What better than seeing Grapes in 3D? We still don’t get most of the American TV networks, nor Hulu, but the IPTV movement is growing rapidly on home soil with every major Canadian TV network offering some sort of online streaming of shows. We need to release the Blackberry Playbook in Canada and make the U.S. wait for a month.

IT spending starts to rebound
Economically, 2010 was a crappy year. Let’s face it, one of the biggest downturns we’ve ever seen hit everyone hard in the pocketbook. We all struggled to get and keep jobs. In the IT industry, the downturn was felt quite strongly too. Companies were spending less on hardware, software and services – pushing the technology they used as long as they could possibly push it. Sometime around spring of 2010, the market started to rebound. Users were starting to by new PCs, Windows 7 was a success and tablets were exciting users. 2010 will be known as the year that IT got a much needed shot in the leg.

RIM hits the mainstream
This is both a good thing and a bad thing for RIM, the makers of Blackberry. Today, look around, you’ll see the smartphone devices everywhere. Use of the popular “Blackberry Messenger” is all over (as well as that annoying “bing” sound). If you’re RIM, you couldn’t be happier about this, usage is soaring, your products are all over and profits are record breaking. All is not rosy in Blackberry-land, however. Mass adoption of these products is starting to create higher user exceptions, features are lagging versus other platforms and the Playbook tablet is both badly named and late to the game already won by someone else. RIM could be in a much worse position, but 2011will be the year RIM proves it deserves to be where it is.

Android changes the game
Speaking of the smartphone and tablet. One year ago, the smartphone market was essentially dominated by RIM and Apple. Then, Google’s free smartphone Operating System, Android, started to add features like crazy. Today, feature for feature, Android phones are the best value on the market. Since the operating system, the development software and the SDK are all essentially free  – the barrier to entry in this market is almost non-existent. Today, some estimates are that 300,000 Android smartphones are being activated every day. Google’s Android is winning the smartphone race and that likely won’t change in 2011.

Online war
2010 also saw quite a bit of warfare play out online. We saw China at ware with Google’s Search, we saw the Stuxnet virus attempting to subvert Iranian nuclear operations. Wikileaks leaked massive amounts of information about the U.S. and other Governments. Recent cable leaks look at the process (or lack) of diplomacy between countries. This year we also saw the rise of fake anti-virus scanners and various social network intrusions (such as Sharejacking).

This concept of openness and lack of privacy was quite invasive throughout the year, even prompting a Globe & Mail feature article. We are having our houses photographed by Google Street view, our information slowly exposed by Facebook, our Tweets sent with geographical information – not to mention how easy it is to accidentally send a “private” tweet. Our phones are becoming smarter – and most of these enhancements are counter to privacy (GPS, Social Media integration, remote access, multiple cameras, enhanced video recording, silent picture taking). Products are even, inadvertently, become more open – and you might even say creepy. Just look at the new Barbie Video Girl as an example. While there is a backlash brewing (eg: Diaspora), we are all living in a more public world, and there is no reason to think that this will change anytime soon.

If you are online, no doubt, even if you are not – you have seen or heard something about Facebook. More than 500 million members strong, Facebook is a phenomenon. 2010 took the ubiquity even further with a focus on it’s founder, Mark Zuckerberg. We saw a movie about him called The Social Network. We saw Zuckerberg named Person of the Year by TIME magazine. In fact, there is is little on the wider Internet these days that hasn’t been touched by Facebook in some way – from Facebook Connect to Facebook Likes to Facebook mail, you’ll see Facebook in most things online today. This isn’t going to change in 2011 either. Expect Oscars for the movie and a possible billion users hitting the little site created in a dorm room. 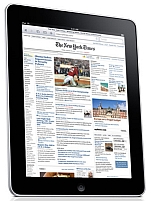 Facebook sure does seem like it was omnipresent in 2010, however, the biggest technology story this year is that of the iPad. I wrote about the iPad more than any other topic on this blog. For good reason, the iPad represented a major disruption in computing and did what Microsoft couldn’t do ten years earlier: Create a mid-range market for tablets. You can be sure, without the iPad, today we would not see the Samsung Galaxy Tab, or Dell Streak or Blackberry Playbook – not to mention the countless device failures or rumors that continue today. You could even say the iPad spurred on the development and advancement of eBook readers, which have been around for sometime, but never faced this kind of competition. The market for tablets has also pushed mobile phone companies to make devices with larger screens and more powerful systems (like a dual-core Android smartphone)

What does 2011 have in store? My Predictions
If you’re an avid reader of this blog, you will probably remember my predictions for the next decade. Most of those are true today – but may not be in the next few years. Either way, I’m on the record. In the more immediate future, however, I’d like to make some predictions for 2011.

1. The iPad 2 will be released in April and prices of the original iPad (on places like Craigslist) will drop to half or more of what they were, the Apple Spin-Cycle continues. The Mac will make major inroads in market share. I will have a Mac before the year is out.

2. This year, the U.S. will catch up with Julian Assange, and it won’t be pretty. Expect all things Wikileaks to get stronger with more new types of services popping up like OpenLeaks. 2011 will be the year that one or two major state secrets are revealed that topple governments.

3. Microsoft will continue to stagnate and (1) admit failure with Windows 7 Phone and (2) later in the year start releasing bits and pieces of their radically different Windows 8. Expect at least the first beta of Windows 8 before the year ends. There will be a version of Windows built just for tablets (called Windows Slate?). There will be no tablet to show off at CES 2011.

4. The “Cloud” buzzword will continue to push into the mainstream. By the end of the year, expect most people to have an idea of what you mean when you say “My data is in the Cloud”.

5. By January 2012, there will be a new social media service that rivals Facebook and Twitter. Let’s just hope it’s not a one-word status update service.

6. Steroids will be implicated in more “rage” murders, and banned in more places, including being used as a euphemism for “exaggerated”.

7. Facebook will release a number of new features (or changes), and most will be benign. One huge shift during the year for Facebook will be the introduction of a Music Streaming service (to rival Spotify) called Facebook Play.

Do you have thoughts about this past year? What did you learn?