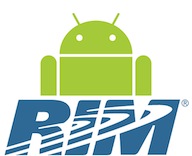 Recently, new evidence has arisen that RIM is testing Android
applications on the Blackberry platform. The implications of being able
to run Android apps on the Playbook are pretty far reaching – but, to
see the Android apps runnable on the millions of RIM devices would be a major coup. Not only that, Research in Motion (RIM) plays this correctly, they could have a huge hit on their hands. Here’s why this is important, and what RIM needs to do.

Update (Mar 24, 2011): RIM announces support for Android applications on the Playbook. Big News!
Update: (Jan 22, 2012): After a number of missteps and seemly poor recent results, RIM’s co-CEOs Jim Balsillie and Mike Lazaridis step down and Thorsten Heins takes over as the new CEO. Big news for the struggling company.

This would be a huge hit – there’s a number of reasons why RIM needs that:
1. RIM is losing marketshare and developer mindshare to the soon-to-be dominant Android Market and the currently dominant iPhone app store. The iPhone app store has been given new life thanks
to the iPad, so don’t expect to see this dominance end any time soon.

2. RIM’s Blackberry App World is mostly a dud despite some developers who have said Blackberry development is one of the best platforms to write on.  However, today the best and most interesting apps come out for the iPhone, not Blackberries.

3. Most of the coolest smartphone features are missing on Blackberries. Have you ever tried wifi tethering on a Blackberry?

4. Not technically a consensus, but the Playbook has not exactly been a home run for RIM. Many are waiting for the device, but RIM does need more than just interest in a device, they need a big hit. Apple is not standing still either, with the iPad 2 launch imminent.

You may wonder if Android applications are even compatible with RIMs blackberry Operating System. The amazing thing is that the both base platforms use Java – and so switching to the use of the Dalvik virtual machine that Android uses would not be a huge technical stretch for RIM.

But, support is one thing – making this the hit that RIM needs – something else entirely. If RIM does support the Android Market, they are going to need to do these things to make this a massive hit:

1. Either ditch the Blackberry App World or push it far into the background so this facility doesn’t confuse users. RIM might make all future Blackberry developers submit their apps to the Android
Market.

2. Keep this as quiet as possible. Hard, I know. Apple’s obsession with keeping things under wrap tends to make a product launch bigger – and make the product more talked about. RIM needs to make this a big slash when it arrives.

3. Support most or all devices from the get go. If not all devices are supported at launch, the majority of the devices active (at the time) should be able to upgrade and run the Dalvik virtual machine.

4. Persuade developers to support this and develop for the RIM hardware. That may be slightly difficult if the move to Android applications cost them companies currently invested in the platform. Perhaps one way to go is making the support for both platforms seamless.

5. Launch close to, or before iPad mania takes over. There may be no way to stop the Apple juggernaut, but a huge RIM announcement would sure distract others from iPad-mania.

Depending on who you talk too or read, this may be what many consider RIMs last stand. I don’t necessarily agree with that, but if the Playbook and/or being able to run Android applications comes out and proves to be anything but a monster hit for RIM, we will probably see a much different company this time next year. Dont expect Google to go along with this either. What kinds of things do you think Google could do to stop RIM from running Android applications on their devices? Time will tell.

Interesting Update: Jamie Murai posts an amazing rant about the Blackberry App World development process (and costs). Well worth the read, as well as the follow-up.