You can imagine my delight, as I’m watching Techcrunch Disrupt, to get an invitation to join Google music. Indeed, I would love too. Google’s Music service (currently in beta) is billed as a cloud-based music storage location that also doubles as a player, music sharing service and playlist maker. The catch, however, was that Google Music is not currently available in Canada. That didn’t stop me. Let’s take a look at this new service.

So, immediately when I received the invite email – I connected to an American-based VPN and then responded to the invitation. When I was sent to the Google Music site, I was presented with the option to download the “Music Manager”. Since I’m running a Mac right now – I downloaded that version and installed. The manager looks like this while it syncs music to the cloud: 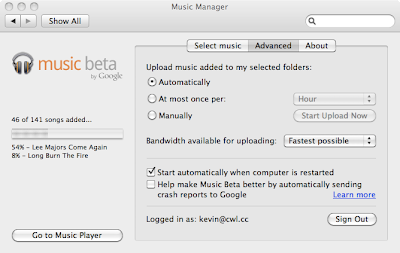 The general idea is that you tell the “Music Manager” where your music is (or tell it to use iTunes) and it will grab that musc and sync it with the server. You can add up to 20,000 songs in various formats (I would add mp3s). While the utility is running, you will see a small icon in your notification bar. The menu in that bar contains a link to your “Music Player”. This is essentially a web link to a page that will auto-login to the player and show you the music in your account. The albums are shown with artwork, if at all available. What’s nice too, was that when I signed up I was asked what kind of music I liked. Because I chose R&B, Google added 40 songs from the genre to my account that I could immediately play. 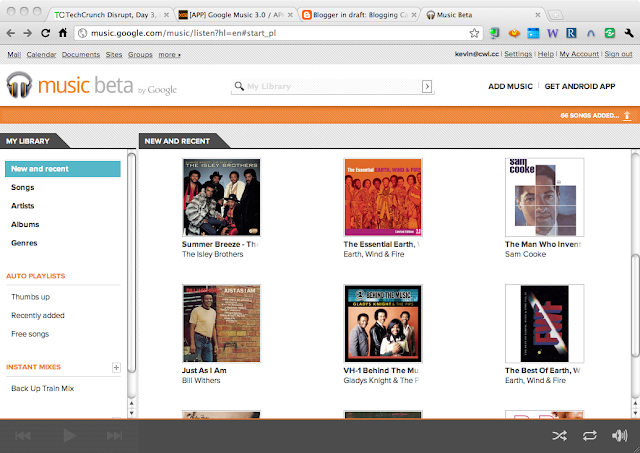 This was great, now I wanted the Android app. You’ll see a link on the top-right named “GET ANDROID APP”, but when I clicked on that I wasn’t able to install that to my phone. You’ll see something like this, with your phone model grayed out:

Not cool at all, so I had to find another way. The good folks at XD-Developers are usually a good source of .APK packages. After a basic search, I was able to find the current version of Google’s Music application here. I placed that on my phone and linked my account – voila! I was able to see and play music in my local library AND the online Music service. 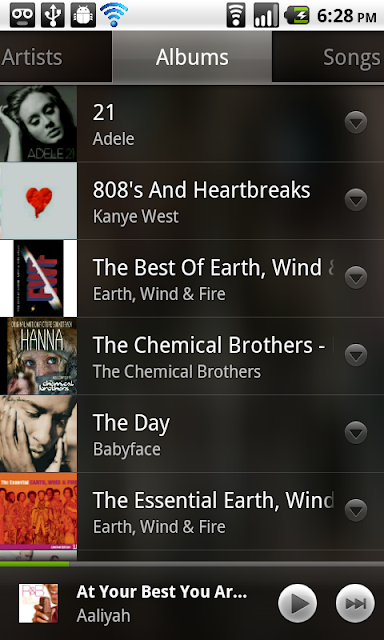 Sharing
It was not abundantly clear as to how playlists or songs might be shared out – but I did recall seeing that written on some copy.

The player controls
At the bottom of the Google Music page is a bar (shown in Chrome below) that allows you to control playback of songs and rate them. The gets  cut off if your browser’s resolution is not wide enough and the page doesn’t seem to indicate that you can scroll.

MP3 Tag Editor
A nice addition is the ability to edit tags for files (Shown below). This allows you to change the cover art and various other details embedded in the files. By now means is this an advanced editor (nor does it handle multiple files – with the exception of an album-wide option), but this should allow you to change files that may have simple or incorrect data. Expect this feature to be greatly enhanced over time. 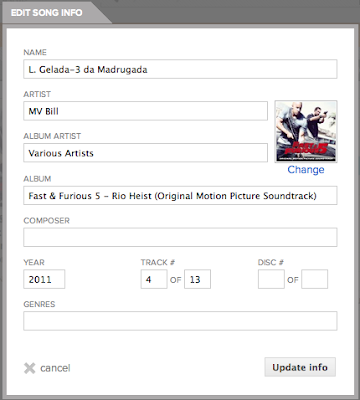 Android App: Streaming over 3G
While some tracks did not play using the mobile app (may or may not be related to the 3G speed), but when files played, the streaming of songs was no issue at all. The speed of the network was more than enough to keep up with the playback.

Android App: Portrait mode
When the accelerometer places the Music application into portrait mode the album covers are placed into a thumbnail-type look. It looks great. 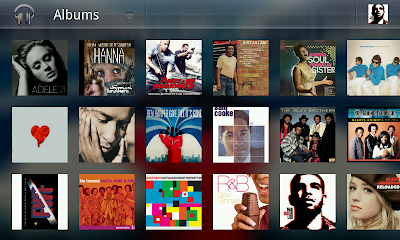 Final Thoughts
A number of sites have been offering negative views on Google’s new service. I, however, think Music is about to solve one of the biggest problems – how to place your entire library in one place and share/play/use it from all devices. Apple appears to be light years away from anything like this right now and Amazon’s Cloud drive doesn’t really have the kind backing a Google or Apple would have. Given that this service is a little rough just underscores that Google must have wanted to get this out there as soon as possible. With Apple mobile device support and dirt-simple sharing options, this would be the service to beat for handling a music collection. I can see a point when all of the music I get is stored in this service and I would play music on devices based on use (iPod Touch=Workout, Computer attached to TV= Entertaining Friends playlist, Phone Bluetooth= Driving Playlist).

The possibilities are amazing here when you look at the fact that music today is in multiple locations. Some of it is on each computer, some is on your phone, some on that old iPod you didn’t bother to move anywhere. What’s more, often when computers fail – the 25gb music collection is not transferred to a new computer and is al lost. We need to manage our music better. Google Music looks to be one of the better services to do that.

Update: May 26th – While attempting to test the Google Music service on an iPad 2 – with Safari, the interface works and music appears to play, but there is no audio. This interface was not designed for the iPad/Web experience.

Update: Nov 19th – Some significant updates have occurred in the last little while. On the iPhone/iPad you can get at Google Music by way of the Gmusic app ($1.99, iTunes).

Also, Google recently released an update to Google Music to integrate a store. You can still put up 20,000 of your own songs and now buy from an expanding catalog on-line. The biggest problem is that we still can’t get this in Canada. After the launch I took a look at the two different on-line markets and here’s what they looked like (click the image to see it bigger): 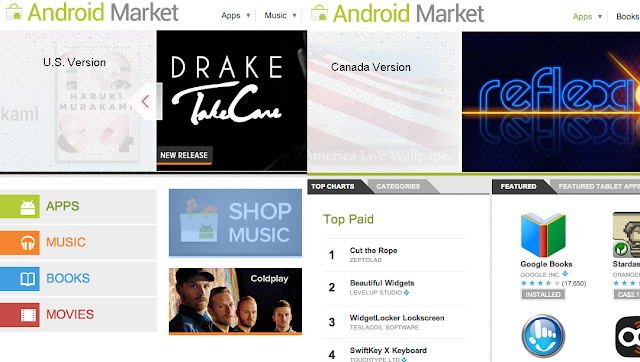 Also, notice the Canadian artist Drake featured in the American store. Let’s hope we see some of this in Canada in the near future!