App portability is very popular these days. Exceedingly so with the sheer options we now have for actual device portability. Could there be a day when all devices, regardless of Operating System, will run the same code? One common idea seems to be the trend of making Android Applications run everywhere. In that vain, I take a look at BlueStacks AppPlayer.

Don’t try this on XP
If you try to install this on Windows XP, you’ll find a whole host of issues – but none of them shown. You’ll see no error messages in this version, the installer will simply fail and not tell you why. As of now, App Player will not run on Windows XP, so don’t bother trying.

On Windows 7
The installer was also quite temperamental on Windows 7. After the first try failed – I installed the .Net 4.0 client, rebooted and then tried to install again. This worked. Once installed, you’ll find two noticeable parts. First, a tray icon that let’s you restart the BlueStacks system and second, a Desktop Gadget that gives you access to the Android shell (by double-clicking on the icon). 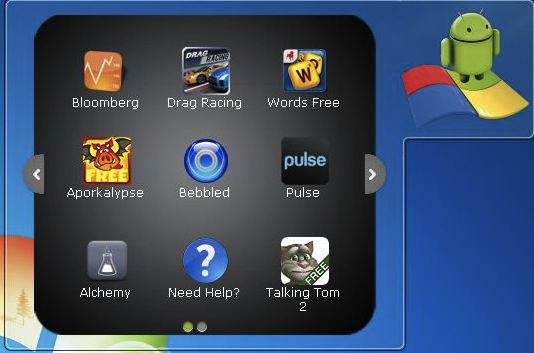 It’s fairly clear from the outset that the applications available would be tightly controlled (more on that later). To run one of the available Android programs, simply click once on an icon and the system starts the launcher full screen.

At least once, with everything I launched, I saw the standard Android “Force Close” window. Simply choosing “Wait” was usually enough to allow the program time to run.

If choosing to force close, I get the “Launch Shortly” screen. Clearly not appropriate in this case since the application is never re-launched. I have to click on the “X” on the bottom-right of the screen. 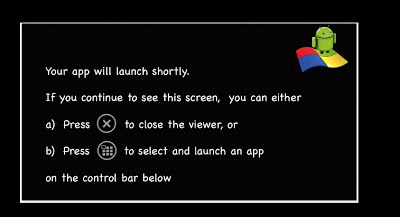 Adding New Apps
Adding new apps required the use of Bluestacks’ walled garden of apps. Even worse, it looks like the process requires you logon to Facebook to get access. What’s with the permissions? Does adding an Android application really require this many permissions? I checked Facebook after installing an application and my wall wasn’t flooded with posts. Given the permissions requested, that may be BlueStacks’ future plans. 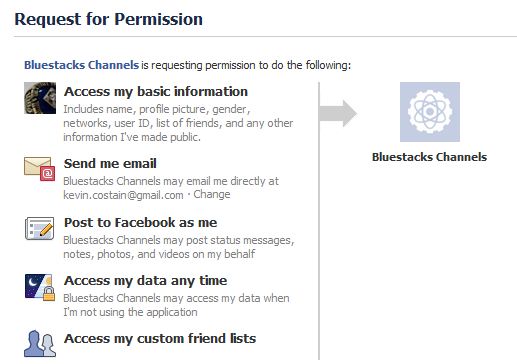 The app list is very thin indeed. From what I see, there are only about 31 more apps available. It appears as though all of these apps are running in the cloud and running remotely somehow. There was no way that I can see to search for apps or add them from an alternate source (IE .apk). This appears to seriously limit the versatility of this platform. Given the power of this platform depends on the versatility of being able to run the many Android applications – limiting it’s ability to do so – really limits the usefulness of the platform. As it is now, this is just a novelty.

Performance
The speed of this system on Windows 7 was positively sluggish, to say the least. I supposed this is to be expected when dealing with Alpha software. Also, I was running this in a Virtual Machine – so you’d have to take these performance issues with a grain of salt.

Also, when running an application the system wanted to go full screen – however, often the system didn’t bring the screen forward – overlaying the gadget on top of your app – making for a challenging operation.

I didn’t see a way to get apps running in a windowed mode. Working with the interface was also tricky. The applications are clearly made for a touch interface, and this must be used with a mouse. Given the slow performance, it wasn’t a seamless process, to say the least.

Final Thoughts
While installation problems and performance issues dog this release for me, the idea certainly has promise. Being able to run Android applications reliably on a Windows tablet and then possibly on all Windows PCs would be a huge plus for those looking to leverage this platform (assuming of course, it opens up and allows users to manually add apps). I feel that details on the Android release itself including platform support and version would go a long way to legitimizing the package. It also appears  (from the website) that this platform will be freemium, based on the number of apps you decide to install.