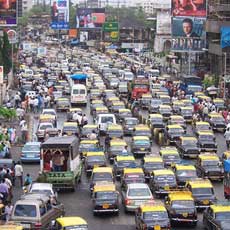 One of the keys to fixing problems with PCs is looking in the more obvious places for problems. On such example occurred when a users’ computer was on the network but yet was unable to transfer data or use the Internet – but will still connected based on every obvious cue. I was somewhat perplexed until I found an answer. Using this method in certain cases can disable a network interface entirely (while still maintaining the ‘connected’ state). Conventional admin tools will fail you in most cases.

A warning though, if you do this – you may render the network interface of your computer unusable and, even worse not know how to get it back. Tread lightly here.

The Trick
Key to this is setting the MAC Address of the computer’s Network Card to all zeros. You’ll find the network card in Windows doing this (one of the many ways):

2. In the run window type: ncpa.cpl to open the network interfaces

4. You should be in the adaptor’s configuration window – look for “Network Address” or “Address” or perhaps “MAC Address”. Not all drivers expose these options, and some still won’t even allow this change. You want to set the Value to twelve zeros, or 000000000000. It looks like this: 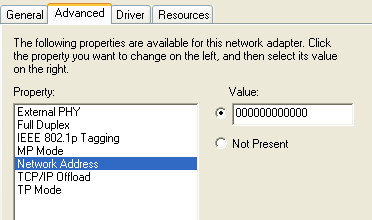