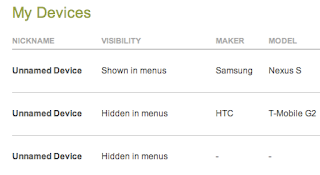 I’m a big user of the Android Operating System. I’ve been using it for some time since having the first Android phone, the T-Mobile G1 in late 2010 and now, recently, the Nexus S. I’m really not a fan of the iPhone – in fact, I can’t take that phone seriously. What is most interesting about both platforms, however, is the application discovery process. Often you find out about apps in the market, you read stuff, and you find blogs that tell you about cool apps. So, I thought I’d make a list too. Here are my favorite Android applications to-date. All of the QR codes provided here can be scanned with your Android device simply with the Google Goggles app.

1. Total Commander – Free – One of the best file managers on Windows is being developed on Android and generally includes some of the best tools I have seen on Android (including a number of plugins that let you do things like browsing your LAN network). This app is a winner and will probably be the best you can get for some time to come. Scan the QR code below to grab it. 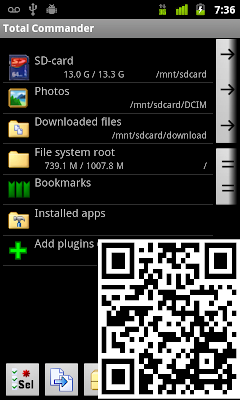 2. Spiceworks Mobile – Free – As an IT guy, I tend to look at managing client sites as something of high importance. The Spiceworks mobile application is a utility that let’s you hook into the various Spiceworks servers  that might might be running. The whole idea of being able to look up tickets and inventory information is novel, if not begging for it’s full potential to be exploited. As it is, you can do some basic things and it’s a worthy addition to your Android-based phone. Scan the QR code below to grab this tool. 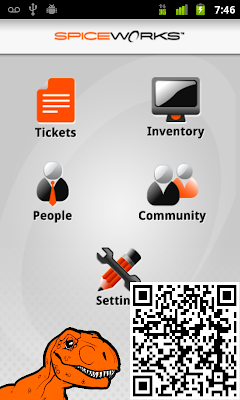 3. Tethering Widget – Free – A tool I found myself looking for the minute I got a new phone – this simple widget program let’s you quickly and easily (From your home screen) turn on or off the WiFi tethering on your Android device. If you can tether and you use this feature, this little app is essential for handing this simple task in one step (instead of too many). Scan the QR code below to grab this from the Market. 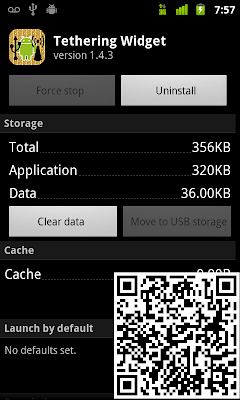 4. TweetCaster – Free/Pro ($4.84) – As a Twitter user, you want to have the best client available. I’ve tied a number of them, and TweetCaster is the best I’ve seen. If you need a Twitter client (and you don’t like the official Twitter app), give this one a spin, it’s great. The pro version removes ads from the product. 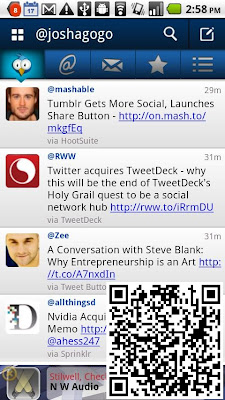 5. Whatsapp – Free –  The field of SMS/Blackberry Messenger (BBM) replacement apps is growing fast. You may not know why you would want one – but it can be spelled out in one sentence. These kinds of apps let you communicate with pictures, audio, video with people on any kind of phone. The promise of having a sort of BBM on every platform is mostly unfulfilled – but Whatsapp is as close as it gets. You’ll also love the fact that many of your friends are already using it! 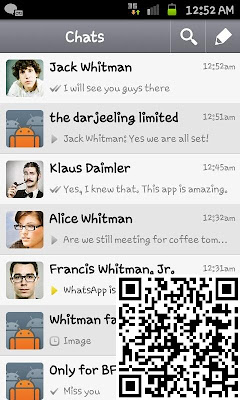 6. Logmein Ignition – $29.99 – This is another IT guy related app, the most expensive on I’ll feature here. The Logmein app allows you to remotely connect to computers and control the desktops of those computers as well as transfer files and other other remote tasks. The Ignition smartphone  product is not going to replace the web or tablet interface in terms of daily use – but, the first time this sucker saves your butt with a 3G connection, you see that it pays for itself immediately. A worthy app purchase. 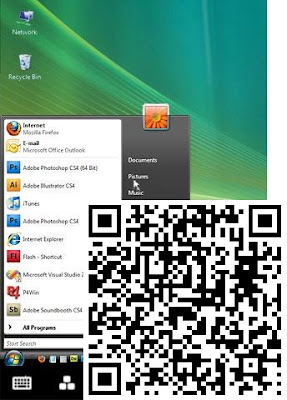 7. DropSync – Free/Pro ($5.99) – If you’re a Dropbox user on Android, you’ll notice that one glaring omission is the ability to sync data from Dropbox to your phone on a constant basis. You have to go after the file in Dropbox’s clunky interface and download or upload the file manually. Enter DropSync, a great utility that allows you to keep a folder on your SD card up-to-date with Dropbox on a regular basis. The key features of the Pro version take away ads and allow you to sync multiple folders. 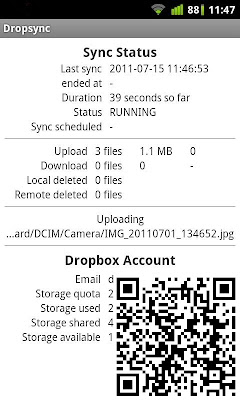 8. WidgetLocker Lockscreen – $3.00 – Many of the lock screen replacements I’ve seen are not nearly as powerful or useful as they purport to be. This is a type of application with a specific use – to allow you to interact and use your device’s lock screen – but with very powerful results. What you really want to do is treat the lock screen as a location that all of your tools and widgets and be easily accessed, saving you precious clicks. WidgetLocker is the best I’ve seen so far. 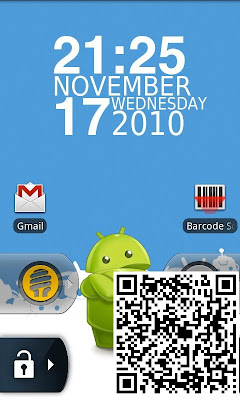 9. Google, Google Google – Free – Google makes some of the best, and worst apps on Android. I find that some of them are really useful, and some are more like novelties. Here are my favorite Android apps in the order that I use them:

Music – We can’t get it in Canada yet – but if you were one of the lucky ones to get an invite, this would be an app that you use often to open and play the music you’ve placed in the cloud. Google Music is in closed Beta right now.

Translate – This is a really useful and timely tool to have whenever you find yourself in a place that doesn’t speak your language. Google Translate has saved me a couple times including that one time I needed to buy a SIM card in Dominican. The conversation mode is not perfect, but still no less incredible. Update this app, pronto.

Google Docs – Much of the power on the web is not possible in a mobile environment – but you’ll find that the Google Docs app on Android is great for finding and looking up information on documents you have stored in your Gapps or Gmail accounts. The widget is nice too, it allows you to jump right to starred items.

10. The Calwell app – Free – Yes, a shameless plug. Use this to follow this blog and all blog posts here by using this nifty little tool. Interested in what it does? Check out this article for more information. Created using the amazing feed.nu tool. If you’re interested in making a simple app that allows others to follow your blog or site, feed.nu is worth a look! 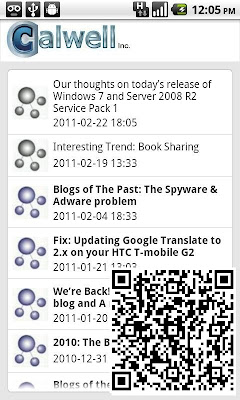 What? Your favorite app is not listed here? I chose the ones that are standouts, but you now have the chance to tell me what are the best apps on Android. Sound off in the comments!