I remember that great line from the Lethal Weapon movie series “I’m getting too old for this shit”. Much as I hate to admit it, this may be true for me also. After watching (online) the just-as-old-as-I-am 39th  season premier episode of CBCs’ Marketplace program, I’m left with numerous thoughts about the state of business, the state of our aged system and the general state of our venerable media outlet – the Canadian Broadcasting Corporation. That’s allot of ground to cover, I know. I hope I can lend some credence to the conversation (that seems to never end). For you Americans, the largesse of my readership, I invite you to look on as I speak about some (mostly) universal ideas.

Now, about this show. CBC’s Marketplace set out to poll customers as well as solicit the services of a “secret shopper” company to determine Canada’s Worst Customer Service. Sure, that has a ring too it and,  with spoiler-y intent, I’ll give away the three worst in order of how they were laid out. 3. Walmart, 2. Canadian Tire and 1. Zellers. The apparent poll was confirmed by the secret shoppers and the stars lined up for this cynical look at big box department stores. You’ll even see blogs referencing this episode as sort of a way to back up claims that customer service sucks.

Everybody wins right? Well, 440 comments into CBC’s technically horrible and moderated commenting system, you wouldn’t see much winning right there. Many commenters are calling the show outright shallow and vacuous. They appear to be saying that focusing on the big box stores leaves out a serious opportunity to look at a real problem. That the “CBC is only good for hockey”. Perhaps they’re right.

I also decided (in a long-winded and hurried post) to add my own thoughts: 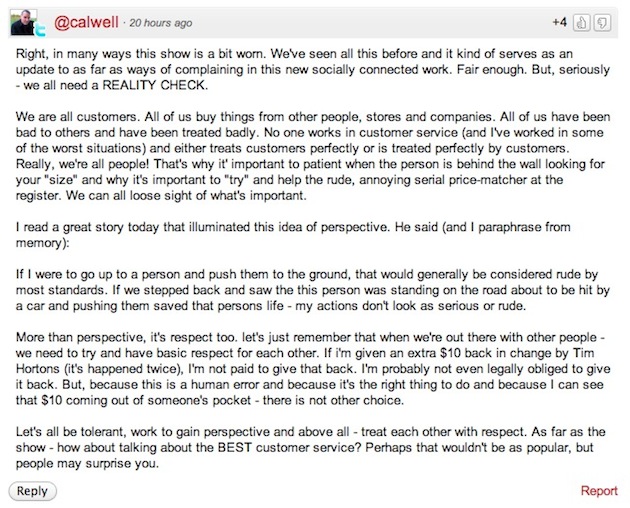 Such is the state of business today. Customer service isn’t dying. It isn’t failing. Customer service is taking a back seat to basic human values. My history with customer interaction goes so far back that I think I’ve forgotten when I started. One of the core things I learned really quickly with customers was that you had to stand your ground. If you made mistake, face it, and move forward the best you can. When you treat a customer with respect and show them you’re making every effort to make them happy – they’ll respond in kind. When I’m working with someone I wish to buy from, I expect they will do the same. (Disclosure: I have worked for Canadian Tire, but don’t that get between us).

That’s all well an good – but, does this mean it was better before? Are things much worse now than they ever were? The simple truth is, everyone has always wanted more for less. It’s always happening and it always will. Stores like Walmart are always advertising a “Rollback” and we’re always looking for ways to save that extra buck. What happens in between seems to be the erosion of perspective and respect (as I mentioned in my comment). That has also been around since I can remember – and we’re always left with a bad taste in our mouths when the balance is thrown off.

Shows like Marketplace serve to throw us off from the main point of the exercise like a lost-leader in one of those seedy furniture stores (I’m not naming names). Yea, we need to be treated better and yes, we do need to be be better at complaining  – but all of that improves if we learn to treat each other better. If you’re at the counter and the price matcher is about to take a chunk out of your day  – what’s to stop you from turning around and saying hi to the next person in line? Strike up a conversation and make the time pass easier for everyone. Doesn’t that sound like a better way to handle a bad situation?

We’re all faced with these kind of situations that could be handled better – but for whatever reason we’re either mistreating a person who doesn’t deserve it or we’re being slapped with entirely unreasonable expectations. The story from Marketplace should be one of teaching others to be assertive, tolerant,  courteous and more forgiving. I want to know what company managed to get backed into a corner but still make the situation right. I want to know about the customers that went the extra mile to treat that cashier with respect on her worst day. That’s the kind of stuff that deserves attention by the CBC.

Yes, the CBC. What in the world are they thinking when they air a show like this? The tagline should be “We’re going to tell you what you already know – but introduce a cool thing called social media”. I wouldn’t expect that any time soon, nor would I expect the CBC to consider this a wasted exercise. Heck, they got me talking about it – so that’s a success right? Perhaps if increasing apathy is your yardstick for success, I would say the CBC has a hit here. See, that aftertaste that lingers after watching this show is the apathy. It’s what’s going to make you want to try and return a used-looking coffee maker after more than 30 days*. I sometimes wonder who thinks this stuff up? Are you stuffy and aged CBC suits ever going to give it a rest with these bizarre kinds of shows? Is the CBC the kind of place we can trust a customer advocacy programme?

All of these thoughts are important to take with a grain of salt of course. After all, this is mass marketed media and and likely something that we shouldn’t all take too seriously. I’m rather annoyed, however, that we’re all seen to be getting exactly what we ask for. We shouldn’t ask for this type of limited perspective on a real problem. We shouldn’t ask to be told that we’re too polite (isn’t that a good thing). And, we definitely shouldn’t be asked to sit through a show that glosses over the real issues. But, hey, I sure do appreciate the lack of commercials while watching online!

I now leave you with the wise words of Roger Murtaugh:

* I don’t question whether the coffee maker was bought used or not, but to think that a store should just take it back without question after thirty-plus days is ludicrous. Here’s a tweet from the show’s co-host: