The Blogger problem, you ask? Well, a number of people recently posted on the Google message boards about an odd issue on Blogger (Google’s free Blogging platform) that spoke of a problem with uploading images to Picasa (Google’s free web photo sharing application and Blogger photo repository).

The Problem:
In the past – blogger would upload images and place them in a folder on Picasa that was named after your blog – in the case of this blog: “Blogging Calwell”. On or around Dec 22, 2011, Blogger started creating new folders in Picasa for each and every picture you uploaded. Wow, if you hadn’t noticed this earlier, your Picasa interface is about to become incredibly unwieldy.

I’ll show you a short-terms fix to this issue to begin with and then look into some of the more interesting ramifications to this problem.

If you have written blogs already and uploaded pictures
Well, you’re out of luck. You’re going to have to head to Picasa and open each picture inside the dated albums, click “Actions” and then “Move to album” and choose the album that corresponds to the name of your blog (for example, this blog is named Blogging Calwell). Once you’ve done that, simply do as you normally would ot add images but use the “From this Blog Interface” as shown below:

If you are writing a new blog
Here’s what you do to make sure pictures get to the right place until the problem is fixed:

1. Click on HTML just above the working text of your blog.

2. Place your cursor on the location that you would like to place the newly uploaded picture. The cursor is going to generally dictate where the image will be located on the page when it’s uploaded. Be sure not to change any of the text in the window!

3. Click on the toolbar icon for adding an image. The red arrow in the image to the right points out the icon. You’ll have some options later for moving the image, so don’t worry too much right  now.

4. Upload the image and choose the options you want. You’ll be able to place the image in the same locations as the “new” interface allows you – it’s just that the interface you’ll use is the “old” one. it looks like this – click on it for a larger image. 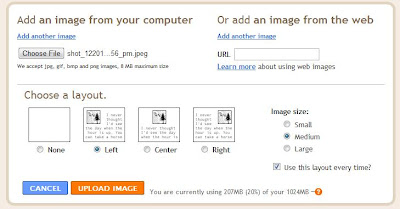 Once done, return to where you were by clicking on the “Compose” button to the left of HTML and manipulate the image further if you wish. These extra steps will ensure that the images you’ve uploaded are placed in a single Picasa folder (and hopefully save you some stress)!. Let’s hope Google fixes this fast.

On using Google’s platforms
This whole incident raises the perils of using Google’s services to store, manage and present your information. What are the implications of doing so when the service is free and Google’s main priority is likely to support revenue-generating endeavors (ie: not you).

1. Google’s response was mainly in message boards and if this board is any indication of response time – a Google employee acknowledged the issue 6 days after the initial report. That wouldn’t indicate the best track record. And, this was only to say they were working on it.

2. The timing would seem to roughly indicate this might be, in part, related to the introduction of Google+ into the Blogger world. if this error was related to that, could the fact that those working on Google+ weren’t talking with the Blogger people?

3. Pushing updates and changes when unfinished would also seem to be an issue for Google. When Buzz was introduced, issues were all over the map – much of it presumed to be because the product was released much, much to early.

4. Finally priority – what sort of priority can Google give to non-paying customers as the ecosystem grows? Is this destined to be a larger issue for Google in the future if they can’t respond quick enough to calm the masses?

Regardless of the outcome on this issue – the future does look interesting for Google-based services. I do know that they have some great features coming up in Gmail and I can only expect to see more Google+ integration across all services. If you aren’t sure still how this issue might affect you – be sure to log into Picasa right now before writing another blog. I’ll update when this issue has been fixed.

Update, January 8th, 2011
It appears as though this issue has been fixed. New image uploads with Blogger’s interface are now going into the right folder. Thanks to Google for getting this done!