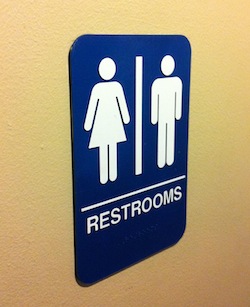 I’m really going to go off topic with this one. The topic of washrooms comes to mind once in a while (especially when I’m using one). For as long as I have been alive, washrooms have been gendered in Canada. By that I mean they have been labelled with either “Men” or “Women”. What we all see is a a sign on the door indicating “Men” or “Women” with a small comic graphic indicating the specific gender the should use the washroom. I wanted to look at how odd this idea is, and what kind of issues that arise because of this gendering.

Those small graphics are of interest too. Did you ever notice what the difference between the male and female version of the graphic is? Yes, the female is usually the male character wearing a dress. Is this what we define as a woman? Is it fair to say that anyone wearing a dress is allow to use this washroom, male or female? No, probably not, since these rules are culturally accepted. In a great blog post, Sociological Images looks at the these ubiquitous signs. It does make me wonder how attaching a piece of clothing to a gender is sociologically out-of-date.

More than being a past notion, washrooms are becoming the same. When I walk into a newly renovated Starbucks, often what I see is a washroom with a toilet, sink, and a baby change station. The same hardware is essentially in the woman’s washroom too. For that reason, many of the newer Starbucks locations I see are actually putting multi-gendered signs on the outside of washrooms. What a great idea, why restrict the use of a washroom to only half the population? In fact, there are a number of organizations pushing for Gender-neutral toilets.

There are other more serious issues that need to be highlighted too, especially for transgendered people who are often embarrassed or ridiculed when using washrooms that don’t adhere to what other’s think is the appropriate gender. The use of a washroom by a parent also creates an interesting (and sometimes uncomfortable) situation when either the parent or the child must use an alternate-gendered washroom and  risk embarrassment until the child grows old enough to go in alone. Some of these issues are alleviated by a “family” washroom, but in places where families gather, like Canada’s Wonderland, those washrooms are painfully busy and in short supply.

The conventions of gendering washrooms seem flipped in countries that are poorer. When I visit the Dominican, I often see clubs or restaurants that prefer the male clientele and underserve women. In some cases, there is only one washroom with a urinal only and no toilet. The woman must work with a urinal or go outside. Even if there is a toilet, there is often just one crowded washroom almost always filled with men and no stall door. This favouring of the male gender is something that exists in Canada too, it’s just harder to see.

The key to gender favouring of North American washrooms is in the numbers. Take a look at washrooms in a very busy location or a sporting event. Notice that the queue to the women’s washroom is extremely long, but often men’s washrooms have no lines or the line is much shorter. Have you wondered why this happens? Sure, women probably do take longer in a washroom, but the number of toilets in men’s and women’s are usually the same. The difference is that men have the advantage of urinals. Even worse, in a busy sporting event most of the men are using the urinals and not touching the toilets (well, until the urinals are filled up, then they start using toilets). Perhaps if this were more efficient, more stalls would be allocated to women.

Also, is the notion of the trendy unisex-sex washroom back in the 1990’s. You might have seen this type of washroom on the show Ally McBeal. There, women and men would use the same washroom and because of the mix of gender (or, perhaps despite it) hijinks would ensue. I asked a couple of people in an extremely unscientific manner about using a unisex washroom, and they absolutely would NOT use a one if the opposite sex was using it. Perhaps this attitude will never change, as each gender seems to require we are given a certain amount of privacy.

February 11, 2012 Update: Well, as it turns out I’m not the only one who’s thought of women’s urinals. Check out this great looking concept from American Standard circa 1953. I do think women also deserve the benefits of getting in and and out of a washroom quick and easy (if they wanted).What’s the solution? Perhaps that is the wrong question to ask? It may be that we just need to stop thinking of washrooms in gender-based ways. As a society, we may not be ready to mic together in one large washroom, but it doesn’t say that a large room with private toilet stalls wouldn’t work. This would adjust to the population as needed, and for the larger events, make those urinals into something more like a trough alone in an area to handle men. Wouldn’t be nice of someone invented a stand up way for women to quickly pee like a urinal? Would you ever consider using a unisex style of washroom?