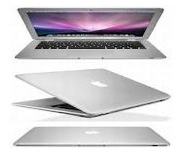 As a longtime daily Windows user, I had never considered -really- using a Mac on a daily basis for what I do. For the most part, it’s not Mac vs PC for me – but when I was first exposed to a Macbook for use as a daily machine, it took a little getting used too. I stayed patient, found the utilities I needed to get things done and found myself using a Macbook on a daily basis.  My lust, however, was for that of a Macbook Air. I wanted that sleek, thin, light, fast (?) machine in my hands for use as a daily device over all these other clunky laptops I’ve had to use in the past. Thanks to the wonders of patience, I found a Macbook Air (original model) that I could use on a daily basis.

The Mission
You already know I’m an IT Guy, so you know I use every operating system (for the most part), but there is one reserved for use on the computer I blog with, read with, and generally browse the Internet with. I’m partial to a machine that sleeps and loads fast, is quick and reliable with a browser and has a nice, bright screen for reading and watching video. I’ve long been interested in trying the Macbook Air as a daily use computer – so today’s mission was to get a Macbook Air as cheap as possible and get it into operating condition.

First thing to note: What I found was an older Macbook Air – it’s not one of the current faster models. Because of that, I had to temper my expectations of speed with a realization that I should not expect the power of this computer to blow me away. This Macbook Air runs with a 1.6 Ghz CPU and a mere 2GB of RAM. Paltry by today’s standards – but the main question I wanted to ask, was it still going to be useful as a daily machine?

Problems
Getting the Air was nice because I managed to get it in an amazing scenario where I could really use it daily. The computer did need a new battery and AC Adaptor though, which was one of the more annoying things I didn’t catch right away. I ordered the MageSafe power adaptor from Amazon and had no issues with that process. In the meantime I would use the rather clunky option of the “T” connector commonly used with Macbook Pros. While the adaptor worked fine, this meant that the Macbook Air wasn’t able to sit flat on a table until I would have what they call “L” connector.

Getting the battery was a different process. It turns out Apple nor one of Apple’s service centers will sell you a battery. You’re forced to take the device in for service to perform a seemingly simple operation of replacing the battery. Options for ordering boiled down to getting one from the US or China.  The challenge when ordering from out of the country was that Canadian Customs and Brokerage fees might kill any of the savings possible on the part. So, I called the Canada Customs Office to find out more. It turns out that there is a 7% tariff on batteries (in addition to taxes). Here’s the thing – with the tariffs come brokerage fees from the carrier (UPS) that can often add another $30+ to the cost of an item. Not good. 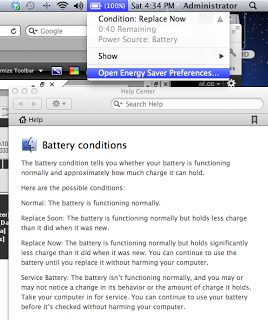 After looking for a what seemed like forever scouring sites like Craigslist and Kijiji – I came across and older ad selling the battery I need. All told, I managed to get an unused battery for $95. A deal considering all the other less-than-steller options available (A deal that would later become a problem). I took the battery back and installed in my Macbook Air right away. The process of battery replacement in the Air is incredibly straightforward.

Also, the computer came with the 10.5.8 (Leopard) version of OSX. What I needed to do to get this computer upgraded to Lion (10.7.3) was a painful series of steps. First, I had to install from a full 10.6 (Snow Leopard) DVD. Then, run all updates available to get to 10.6.8 and then install from a full 1.7.3 (Lion) DVD to get to a current version. It appears that every upgrade version of OSX requires the previous generation to be installed and skipping over versions isn’t possible. This will eat a good few hours of your time just waiting for it to finish. In addition, this computer is not going to be compatible with 10.8 (Mountain Lion) upgrade due to limited graphics support, so this would be the end of the line for OS X upgrades.

With all of that done, I was ready to actually start using this Macbook Air.

My Impressions
I’m happy to say, this was a smart decision. The Air is something to really have your hands on and use. I’m actually typing this article on the Air right now, and it feels so much more comfortable to use in my hands than the rather large and clunky Macbook did. I notice the screen is also much clearer and cleaner. Since this is the 13″ model of Air, the screen real estate is probably the same as my previous Mac, but it still “feels” bigger.

I wanted to mention the speed too. This Air is noticeably slower at handling things than the older Macbook did. That was a bit of a disappointment since I did expect more. But, for the generation of the device – that might have been something I should have assumed. Often too, an upgrade to the operating system is going to slow the computer down, not speed it up. For things like blogging and web access, the Air is more than capable as a computer. For stuff that’s more intense (like photo manipulation), I can tell this computer could use more speed or perhaps even memory. But, alas, that can’t be changed.

I also wondered how it might feel too loose all of the connectors and the CD-ROM drive. Probably the biggest missing piece is the lack of a network connector (RJ45). It remains to be seen how this will all effect me in the field (since in some places I don’t have WiFi), but for now it doesn’t seem to be a major problem. Given how amazing this machine is – a network connection would be the biggest omission for network administrators. I tend to use the RJ45 connector in rare cases anyway – opting for Wifi from either a hotspot or a local location. I don’t see the loss of an optical drive as a problem since I would just use an external drive for those cases.

The keyboard backlight is yet to be of any use to me. I thought it was a cool feature when I first saw it, but the light doesn’t show when I use a cover – and I rarely find myself with such little light that I would need it anyway. I do think its something all laptops should be able to do. I opted to shut it off with the available function keys to preserve the battery.

I wasn’t sure how I was going to like Apple’s approach at minimalism. The fact is, Apple should likely be credited with crediting this market of computer – the thin laptop called the ultrabook. Given that in a few short months there will be more selection of Ultrabooks than you can imagine – don’t leave this one out fo the equation. This is a solid, light and cool looking machine and so far a pleasure to work with.

As a side note: If you’re looking for hard-to-get items or interested in sending me on a mission just like this one. Don’t hesitate to contact me by email and I’ll find a way to get what what you need (if it’s at all possible).