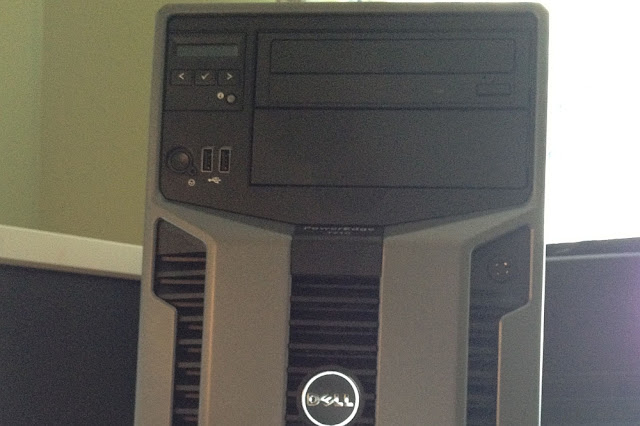 The higher-end (and much heavier) server tower offered by Dell as the PowerEdge T710 is one heck of a monster. Measuring more than a few inches deeper than the lower-end T410 server, this bad boy looks to be built for power and speed. Today, the plan with this PowerEdge T710 is to set it up as a member server of a domain and eventually use it as a database server. I’ll take the machine through it’s paces and show you what I thought of this server. Along the way, I’ll share some tips and other information I think might be useful.

Summary: Join me as I take a closer look at this machine, it’s setup and configuration.

You’ll notice right away that the T710 has an LCD on the front bezel, and a different set of colours than the typical black on black that Dell usually ships. It’s certainly a matter of preference, but this is pretty cool looking right when it comes out of the box. The standard two USB ports are right next to the power button (making it easier to swap keyboards and mice while setting up).

On the back, you have a full four network ports, and six expansion slots. There is also 6 USB ports as well as a standard serial and VGA port to go with the redundant power supply. On the bottom left, you have two huge fans. 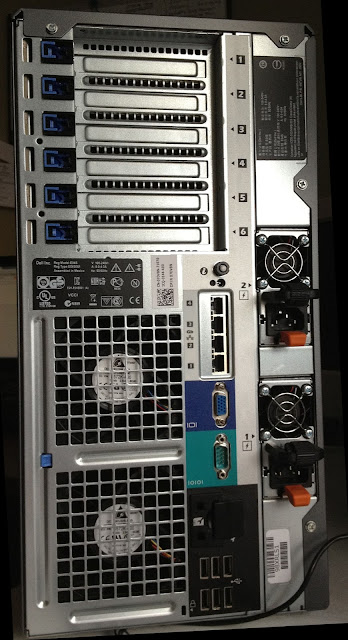 With Windows Server 2008 R2 factory installed, the system just booted right into Windows and did a simple and quick job of the setup. Everything was already installed, so there was little waiting (beyond installing newer updates). As with other servers, there were very few applications installed on the machine (and that’s a very good thing).

Since I was only using one network port and a separate switch to setup the machine, joining the domain wasn’t any issue – nor was the network configuration. This is how you want server setups to go every time.

Final Thoughts
This mammoth machine seems like the most powerful server you’d want to buy before moving up to the rack mounted servers from Dell. The T710 is big, loud and an impressive piece of machinery that you should find more than capable.