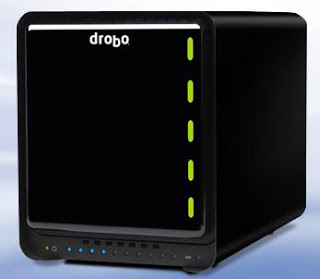 The storage space comprised of  NAS (Network Attached Storage) devices is an interesting one. It appears to be growing in multiple ways –  companies are downsizing away from the server they didn’t need, gamers are looking for that home data store, and businesses are increasingly using them for backup applications. I’ve seen great many of these devices, and today I was able to look at the Drobo FS, a five drive NAS device with one and two drive failover capabilities aimed at users and small businesses.

Summary: I take a look and provide thoughts on the 5-port NAS device from Drobo called the Drobo FS.

First Look
Drobo FS is shipped without drives in a fairly unassuming package. Once opened up, you get the expected CDs and power cords and the Drobo FS itself in a nylon bag. Here’s what the Drobo FS looks like when you first take it out of the box. 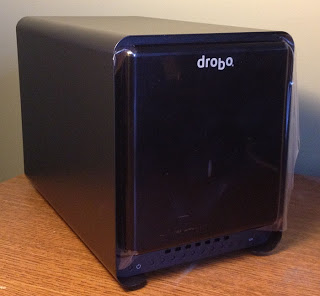 That front cover is actually a nifty idea. You simply just pull it off because it’s attached magnetically. Once you get it off, the other side contains information about the diagnostic lights you see when the unit is on. 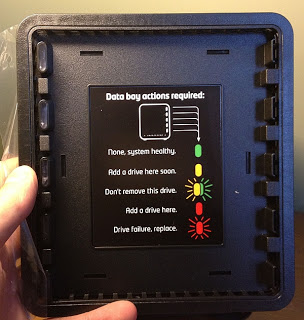 The front and back of the Drobo FS without it’s cover reveal exactly what you might expect. The back fan is also pretty massive. 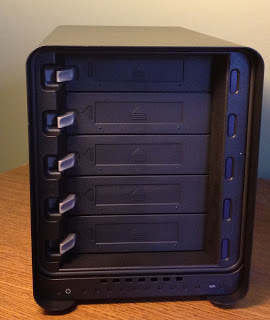 Notice also, that this version of the Drobo includes only one network port. There are indicators on the front of the drive slots that point up (that the drive should be inserted with the top up). 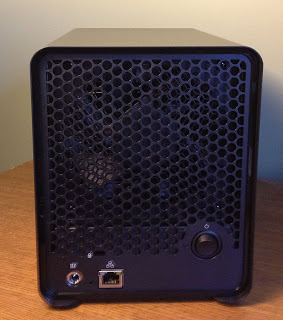 When looking into one of the slots themselves you can set the standard SATA connector, and a cool little spring that pushes the drive out when you want to remove it. This looks like it should be, simple and straightforward.

Adding drives was a little flimsy because while you use one hand to pull back the grey clip and the other to line up the drive – you don’t feel the last little insertion of the connector that is common with SATA drives. You have to trust that since the drive feels like it’s all the way in that it’s in the way it should be.


Starting Up
The first time you use the Drobo, they suggest you first install the software (Dashboard) and have two drives in the device. I did that and put the dashboard software on a Windows XP machine. When I did that, the Dashboard application saw the connected device and started doing things. The connection wasn’t immediate, but it did happen in a reasonable amount of time. 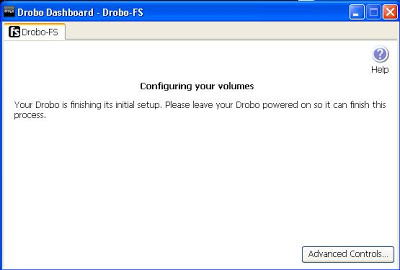 The first thing you ought to do is check for updates before anything happens.. and the Drobo FS did that relatively smoothly and without hassles. It wasn’t clear as to what part of the process was downloading the updates nor, which part was the installation.

Once done, you just reboot. When the Drobo FS comes back online, the software picks it up immediately. Actually, what seems to happen is the NAS goes offline repeatedly as the software runs, and then is re-detected.

Once the firmware was updated, I started to add drives to the Drobo FS taking it from two to 5 drives. This was all done while the Drobo was powered on. Here’s a look at the process of adding the third through the fifth drives. Notice that there was some trouble getting the last drive in.. the feel of how a drive sits in the Drobo is not exactly intuitive.

If you’re curious what the entire start up process looks like from a cold boot, take a look at the following video. The entire process takes about one minute, twenty seconds.

Problems
One of the more annoying things that happened was that when the Drobo’s firmware was updated, the Drobo Dashboard application became incompatible with the NAS itself. Because of that, no settings were changeable and you would get this error when you attempted to change or view options with the dashboard. 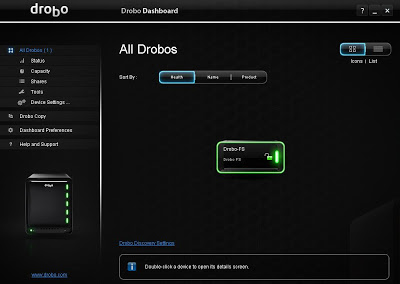 Also, of note is the fact that Drobo FS’s administrator account is “Admin”. You need to use a capital “A” at the beginning of that username. “admin” or “ADMIN” or anything else is going to fail and possibly frustrate you to now end.

DroboApps
One of the (apparently) things about the Drobo is that it’s extensible and can work with other apps installed by way of something call “DroboApps” and a website with a bunch of links for various apps. There aren’t allot of apps, but the ones I had particular interest in were the rsync and Apache apps.

Installation of apps is a tedious process (for the most part). You have to download a zip file  (rsync.zip, for example), have the presence of mind to unzip that and place the tgz file (rsync.tgz for example) in the /droboapps directory and reboot the device. Well, for the case where you’re not paying attention and just put the zip file – it’s a wasted few minutes rebooting.

Configuration of the apps is also fairly daunting – likely impossible for the average user. For a service that should exist in any sort of NAS like this, I was quite surprised how difficult this was. Other offerings from Netgear and QNAP are much more capable in this respect. Ultimatley, the answer was correctly editing the rsyncd.conf file found in the DroboApps share exposed to the administrator.

Final thoughts
The Drobo FS is a nice NAS that has some real potential. I will need to run the Drobo FS for a while to see how reliable it is, but the basics of setup are fairly straightforward. The ability of the Dashboard utility to detect the NAS automatically will certainly help the less technical users. Problems with the setup and doing more advanced functions would keep me from choosing this over competing products right now. I also noticed with this unit, the fan was making too much noise. With a single fan in the device, there is only one point of failure – one that would be catastrophic.

In addition, I do like the fact that you can install various apps. It’s is one of the bigger pluses of the Drobo FS, but he lack of selection is disappointing. Let’s hope there are more apps made outside of what Drobo offers.