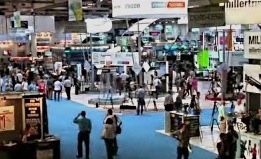 With what I do, you’d really think I would love trade shows. As an IT Consultant and a writer, you might imagine the trade show is like the “perfect storm” for a guy like me. Well, it’s actually the opposite. I’m somehow endlessly bothered by trade shows and fairs. In fact, I find trade shows to be a mind numbing process of marketing, sales tactics and walking in circles. I’m not one to be overly negative about things, and I really don’t want this to be like that – but if you’ll indulge me, I can show you why these events an really suck.

Summary: In technology, trade shows are a fact of life. For me, most are a painful experience.

Recently I attended a trade show after not being to one in many years. I won’t tell you the show’s name, but the nice presenter lady was doing her thing about Linkedin. This was a good presentation, she was affable, and the information she was giving to, by all appearances, correct. But, smattered in between somewhat interesting slides (I hate you Powerpoint) was a the constant plugging of her company and full slides plugging her services. I was thinking, I remember why I avoid these things!

This brief exposure to another trade show culminated when I decided to ask a question of our presenter. It had been a while since I spoke in front of this many people, no nerves. “What is your recipe for engagement? How do you engage with people that are often apathetic?” her response was what I consider a metaphor for the common trade show experience. She said “When I post a question on Linkedin, I email my most influential friends and get them to comment on the question. It gets the conversation going”

Here’s the thing, there’s nothing wrong with that. But, the conversation –  like an “information” session that exists to sell your wares – has a very contrived and forced feeling to it. Perhaps others don’t pickup on that, but if you look you’ll see it. When I see it, that really turns me off.

Now, I know what you’re thinking – no, they aren’t all the same, and I probably shouldn’t be asking so much for what amounts to a “free” session. But, the main reason why I would go to see this is because it has more value than I could get on my own. The intrinsic value of networking with others is also at trade shows too. It does make me wonder if it’s any different at the big high-priced trade shows? These things are probably attended by folks looking to get their money’s worth but are bombarded with marketing.

In 1997 I was at the biggest trade show of them all, CES. That experience was fascinating in many ways. My job there was to be the engineer on hand as we demoed a new computer system called “PCCinema” from TigerDirect. Well, the demo went pretty good (for the most part (the PC had some trouble playing the Terminator 2 DVD) and I was able to look around  for my short visit in Vegas. I wish had more time to check out rest of the show, but sadly, I didn’t.

I don’t know if I’ll ever come across an event that changes my mind. I sure would like to see one. I do see the value in getting like-minded professionals together to discuss products and topics. But, it needs to be more about the discussion and less about sell, sell, sell. And, if you’re giving away a free USB Flash drive, I’m definitely not going.