Previously, I have covered an application that automates the web (To do something like: If it’s going to rain tomorrow, email me) – that application is If This Then That (IFTTT) and it’s amazing. In fact, it’s one of my few “Great Tools” (read my take here). IFTT does great work for things you want to have handled based on event occurrences – but a tool to automate the frequency of information you put out there could be useful. Enter Buffer. The idea is, you add posts to a buffer and the application keeps them ready. Once a scheduled point in time arrives, Buffer posts the update automatically. Let’s take a look at this interesting new application.

Summary: I take a closer look at a new web application that automates the frequency of status posts to various sites.

What does Buffer do? It takes all those status updates and places it in a storage spot in their server. Then, on a schedule you dictate – posts those updates one by one. 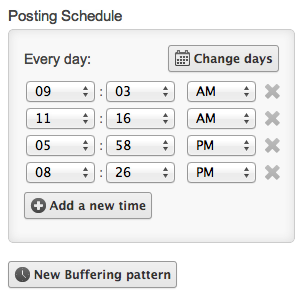 So, the above is the secret sauce of Buffer (if you will). The above picture outlines the posting pattern to the Calwell Facebook Page. Posts in the buffer will be posted at the above times throughout the day. The “New Buffering Pattern” button let’s you change up the schedule for certain days (but that’s a paid feature).

The advantages of this are a few fold:
1. Buffer lets you do all the posting work at one time and will spread the posts over the day. This seems really value for folks like me who are often out in the field working and aren’t spending all day writing and posting.
2. Readers of your social media presence get a more consistent stream of information
3. You don’t end up posting 8 updates in a row and nothing for the rest of the day. This gives the people you share with a chance to actually read the stuff.

Buffer’s approach to solving these issues is certainly sound. You have a multitude of options to control the process of posting to the platforms it supports (currently Twitter, Facebook, Facebook Pages and Linkedin). In my experience so far, posts were on time and the service worked as expected. The beauty of Buffer is the large number of ways to get your content into the queue of posts (yes, you can post now, but I wouldn’t use buffer to do that). Posting to Google+ would be a huge bonus.

Other good stuff
This app becomes more compelling when looking at the ecosystem build around it for getting posts into your buffer. Here are some of the tools they have for this purpose:

1. IPhone app and script – you use this free app to check on the contents of your buffer and see various bits of analytics data. As a bonus, the iPhone app directs you on how to place a script in mobile Safari that lets you create posts when reading content there.

2. Chrome Browser Plugin – the seemingly simple plugin allowing you to put posts into you Buffer – also appears to double as a Google Reader plugin (giving you a place in Reader to create posts from) as well as a plugin for Twitter, Facebook and likely a host of other places. The extent of options this extension creates is not entirely clear, but it’s a must have if you use Chrome.

3. Android app – I would imagine this works like the iPhone app (or at least in the same vain).

The Buffer website itself has a bunch of tools for your use as well including posting on a schedule in your timezone and analytics. Several other features are only included in paid accounts.

Analytics
This is where Buffer goes beyond some other tools. Buffer let’s you see how your social media posts are performing on the various sites. In my experience with Buffer, the analytics were fairly limited if you decide to use te bit.ly shortening services. Although they don’t say it, I think using the buff.ly shortening service is likely to yield more analytics information.

How do they make money?
Buffer uses a Freemium model to sell enhanced packages called “Awesome“. While Buffer’s blog mentions that free use will exist “forever”, the free accounts are also limited to at most 10 posts queued for each account – and 3 actual posts a day per account – though that may change in time.

Some of the more popular requests Buffer include posting to Google+ (which they’ll release when Google+ has an API available), better analytics and pulling in an RSS feed (like a blog). With Buffer you can start to use social media in a more consistent and predictable way. Give Buffer a try too, you may find this very useful.