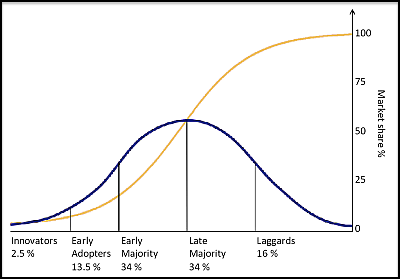 Are you familiar with the term “Early Adopter”? Based on Everett Rogers theory coined Diffusion of innovations. These folks are generally the people who will buy new products as fast as possible (and can afford them) an then influence others buy talking about said product. Often that influence is based on reviews of the product publicly or by that person talking to other folks in a social circle. Are you an early adopter? If you’re reading this, you likely aren’t the pure definition of this category, but more of a combination of two or three of the categories (depending your risk tolerance). Based on my experience, there is a kind of category that seems to be missing from all this. Let me explain.

Tell me if this sounds anything like you: As new technology products come out, you want to get your hands on them. No matter what the cost or the platform, you’re doing what you can to buy these new products so you can test them, work with them, and understand how they work. In less than six months of use, you’ll take this new technology and sell it off or give it away to another person. You want it early, and you want to get rid of it almost as quickly. At given points in time, you may have several overlapping types of technology in daily use. No? Well, this is not like most folks who buy stuff early.

Those who buy early, or the early adopter, generally buy and keep the things they buy. They’ll use it and probably get rid of it at some point (when the next shiny new toy comes along or it breaks). The main difference here is that the early adopter wants to have this new stuff and wants to keep it. They may even show it off or use it as a status symbol of sorts. There doesn’t seem to be a definition for the person who is something of an assembly line of new product adoption. The question becomes, is this the Innovator?

My feeling is that the earliest of adopters are the Innovators. These are the folks that get access to pre-released version of devices and products. In some cases they may work for the company making the product, or they may be beta testers or people otherwise “in the loop” in ways most of us don’t get to be. Here at Calwell, we don’t generally get access to anything early (although that is changing), leaving us to buy the stuff just like everyone else. We generally prefer to set-up relationships with suppliers and also make use of on-line sales markets whenever we’re after a product.

I’ve always thought it would be great to set-up a fund of a few thousand dollars dedicated to procuring new technology related items. Once it was time to sell the item, the money generated from sales would then return to the fund and continue to buy new products as more are released. This hasn’t been realized, but it’s an idea I’m pondering seriously. There is always a constant stream of new products out here and customers interested in which are the best for them.

This is the essence of the active adopter. The intention behind getting the products are to understand them, test them, review them, understand them and then let go and make way for something else. I’m often getting in trouble because the new things I try make it difficult for people to get ahold of me. Certainly, I’m guilty of that (though everyone should know that the best way to find me is by email: info@cwl.cc). The constant process of obtaining new stuff can sometimes take a toll on communications.

Those who market products are classically after the early adopters, and for good reason – they are willing to bare the financial risk to test out new products. In that same vain, I think markers should be more tuned to those that fall into the active adopter category. These are the users that will gain them the most exposure to new customers through word of mouth, blogs and or other forms of communications. These are the people that will influence product choices the most.

What purchasing category would you put yourself in? Innovator? Active Adopter? Early Adopter? Majority? Laggards? Do you consider yourself a mix? Why?