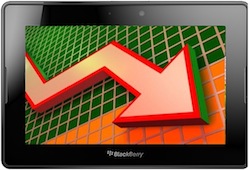 Oh, how you have fallen. You were the tablet that was going to challenge the 90%+ market share of the iPad. You were going to link from an existing Blackberry to create a secure, bigger kind of Blackberry. You were going to be the promise of accessing a bazillion applications from two different App Stores all running on your sleek, thin easy-to-multitask package. You the promise of so much, Playbook, what happened to you?

When you were first released in April, your price points were very close to that of the iPad. Presumably, you knew you had to be the same or close to compete with it. There were hints that you might support Android applications, all was right and RIM manufactured lots of you ahead of the release date.

In July or so of 2011, some were getting deals for as low as $450 (us) for you. This may have been when the cracks started to show in your armour.

The reviews weren’t exactly loving either. You really were underwhelming to many who were expecting so much more. Perhaps you needed to be more sexy?

On December 26th, 2011 – Boxing Day sales were all a flutter, selling you for really low prices. I would hear of many people getting in and grabbing you at this time thinking they were getting a great deal. The stock was limited, but many took interest in you.

In January, your price dropped again (from regular price), to $299 for every model. Yes, all of them, even the 64GB models.

Then, you dropped even further – in February of 2012 to an all new low of $149.99 and there were hits that retailers considered the product “end of life“. Soon, the Telus site that listed this low price would be taken down and a 404 error put up in it’s place.

On used sale places like Craigslist, people really didn’t get the memo about Playbooks dropping rapidly in price, selling you for so much – no mere mortal would possibly pay.

Playbook, you’re really getting no love right now. I’ve met you and you’re really really cool. But, you’re competing against something closer to a force of nature (and hurting the guys who made you, RIM).  If I were a betting man, oh Playbook, I would be betting against you right now – and I really, really, really don’t want too. You’re 2.0 version software looks so very nice too, I hope it get’s here fast while you still have a chance.