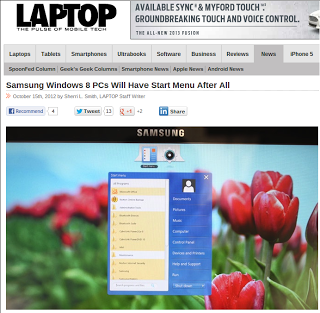 Sherri L. Smith, writing for Laptop Magazine created an article titled “Samsung Windows 8 PCs Will Have Start Menu After All” that has to be one of the most bizarrely misleading titles I’ve seen in a while. The article is based entirely on a piece of software by Samsung that will imitate “Windows’ familiar Start Menu” and yet the title says “Have Start Menu” not ‘Have a kind of  Start Menu’ or ‘Have a mimicked Start Menu’, the title is talking about the actual Start Menu, but that’s false. There isn’t one in Windows 8.

It gets better though, Sherri goes on to relay from Zdnet that “the S Launcher wouldn’t make it into the final shipping product” and that it would be a download. So, then, now her title should be something like:

Seriously. What the hell?