With Windows 8 and iPad Mini tablets taking a good part of the spotlight these days, it’s important to not that laptops do still exist. These days, businesses are often opting for a laptop instead of a desktop for the enhanced mobility options afforded. Today, I look at a lower-end PC laptop from Lenovo that should be ideally suited for business.

This system ships with no recovery CDs – to get them, you’ll have to create the disks from software tools. As typical with vendors – they don’t give you the access to just take the (very portable) ISO files and force you to at least make the CD (and when you don’t have one, you’re stuck). This process can be greatly improved and I’d wish manufacturers would take note. To get the ISO files I wanted, I created the 5 DVD-Roms from the recovery process and then used the installed software to create the images I wanted.

The E530 sports a massive chiclet keyboard that includes a number keypad that should make all those in your financial department very happy indeed. In our testing, it was great to be able to reach over and start typing on the number keys when needed. One casualty on the keyboard are the function keys (such as F1, F2..). It appeared as though there was no way to turn them on permanently, forcing you to use the far-left orange “Fn” key to enable the F keys.

Speed & Battery
Being a “Lenovo Enhanced Experience 3” computer, we were acutely interested in the speed of this machine. The “Enhanced Experience 3” computer is supposed to boot 40% faster than a typical Windows 7 Computer and our perception was that it did, in fact, appear to boot fast – though we weren’t blown away. In one case however, booting up after updates actually caused the computer to freeze.

We found the battery charged noticeably quick. Every one of the four E530’s we tested arrived with a half-full battery, and, when plugged in the computer was at full charge in no time. The large battery indicator on this computer’s taskbar is great for making sure you have a good idea of the power left.

Forced Software & Shovelware
The first-boot startup was an odd process (and the first time we had seen this). Lenovo forces a set of what seem clearly like ads for software instead of offering choice. It starts with Norton Anti-Virus, then Office, then finally SugarSync (a cloud backup tool). This un-closeable interface that loads before the shell really gives the user little chance to back out or do anything but choose. Certainly, it seems like a whole new level of shovelware. 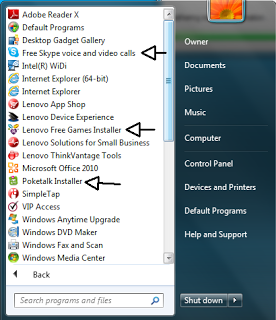 Some of the forcefully pre-installed (that you may not want):
– Google Chrome
– Norton Internet Security
– Google Toolbar for Internet Explorer
– Evernote
– SugarSync Manager
There is more on the computer, but these are the bigger ones.

It’s a problem with many manufacturers when they pre-install software, but perhaps far worse is when they strategically place various links around the system to installations for software. In this case, Lenovo does this with a number of titles like Skype and games. Most of this stuff is launched by way of a script in C:SWTOOLS. That folder alone consumes close to 6 GB of space on the users drive.

Built-In Lenovo Apps
There is a full screen tool called “Simple Tap” that appears to look like a full screen mobile interface for Windows 7. The trouble is, this laptop doesn’t have a touch screen – so this feels very out-of place. Also, the conspicuous placement of preinstalled applications, again, suggests advertising.

Simple Tap is pretty and perhaps on a tablet device, this might be even useful. With Windows 8 out on October 26th, this interface is probably soon to be relegated to the history books. 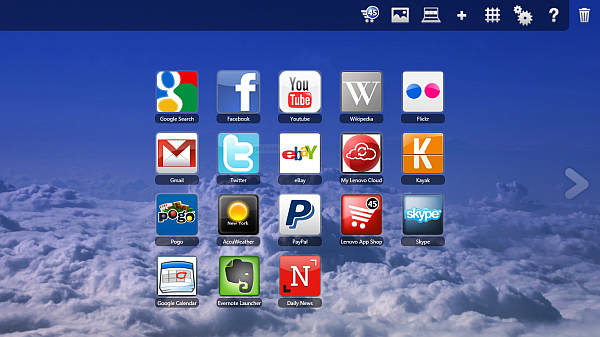 Not having the serial number visible from the bottom of the machine was a real annoyance. In fact, all of the information you’ll need related to machine (including the Windows key) requires you remove the battery and this kill power to the machine completely  It appears that this may have been an effort on Lenovo’s part to avoid having stickers come off. 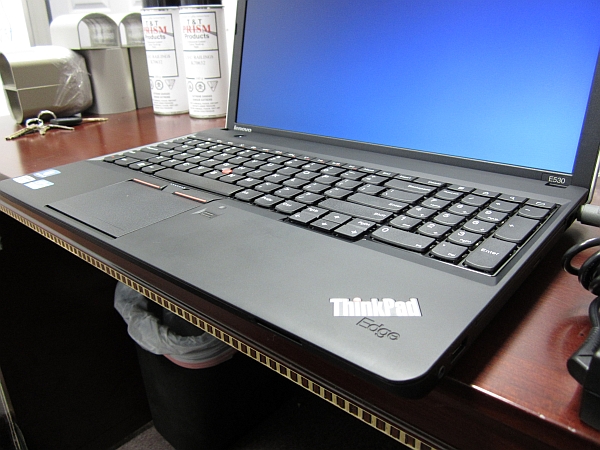 Conclusion
The Lenovo E530 is a good machine with fast boot speed that is mired in some serious crapware. The placement of ports and large size of keyboard help make up for this, but everywhere you turn with this computer, you’ll find an annoyance. After a little work, the computer becomes much more bearable and usable. This may not be the computer you run out and buy, but as a low cost laptop, it’s a good buy.