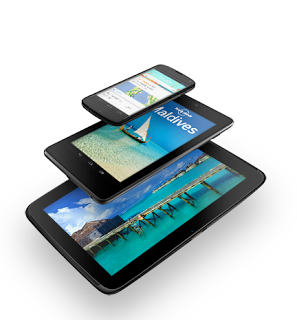 It’s interesting that we may (or may not) look back on this point in history and think of it as: “That time when Google really joined the tablet market“. Well, perhaps not as seriously, but we’ll definitely paint a picture of Google telling everyone that they’ve jumped head-first into the tablet market. What Google announced on this storm-swept, Sandy-barraged East Coast was a number of new devices and update to the Android operating system. Google had planned an event to announce all of this on Monday October 29th, but had to cancel because of the coming hurricane Sandy.

What Google was left with, was announcing all of this good stuff in a blog post. Rather unorthodox to see of this new stuff presented without an event or someone showing it off. Here’s a run down of what Google is releasing:

I think, by far the biggest addition to this list is the multi-user support in Android. if it’s implemented well, it will put Android into an interesting class of tablets. I’m still not sold on speed improvements, but I know Google needs to work harder there. Google Now is turning into something very usable.

It starts to make much more sense now why some people have reported getting a 16 GB model back when sending tablets in for warranty. It appears as though Google stopped manufacturing the 8 GB early on.

With a 4.7 inch screen, the thing is huge. How huge? The Samsung Galaxy Note is 5.5 inches and it’s impossibly huge. My feeling is there really is no market for this kind of thing. If it’s smaller than 7 inches it really has to be scaled down to phone size. This a very interesting move by Google and all at a very reasonable price for an unlocked phone. Or, a tablet?

Clearly competing with the iPad (and undercutting by $100 memory-for-memory), the Nexus 10 out-specs the iPad 4 in a number of ways including size (10.1 versus 9.7 inches) and pixel density (299 ppi versus 264 ppi) And, making full use of multi-user features with Android 4.2 make this new tablet a very compelling entry.