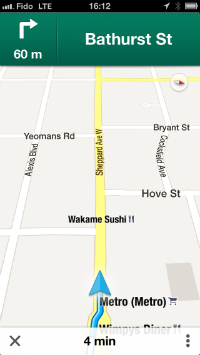 Downloaded 10 million times within 2 days of release, it’s quite easy to say Google’s new Maps on iOS is popular. When Maps was released for iOS, I immediately installed the app just like what seemed like every iOS user. What happened next was a complete shift from using Apple’s maps to this new offering from Google. While it would be a stretch to “technically” call the map details more accurate, using Google’s maps when driving feels better.

It does seem more accurate too. In fact, everything feels better in Google’s mapping application, from the routing, to the sound of the voice to the simple but effective interface. It just works, and is perhaps something we’ve become accustomed to. As you might expect, traffic, satellite and transit information  can be included on the map. These options are pretty heavily spaced suggesting Google might be planning to add new options in the future.

No iPad for you

This is perhaps the biggest blight, but Google Maps does not run in full iPad resolution. Instead, running as a scaled application, you have to zoom in to get the tool full screen, and that looks ugly.

This is perhaps one of the more useful tips I’ve come across (I wish I could recall where, and I’d link to that). The way to use Siri to route through Google maps is adding (or saying) “via transit” at the end of your routing phrase. This may be “Take me to John Smith via transit“. You’ll see a flash of Apple’s maps and then a screen that shows Google’s Map program and a button to route.

While all iOS users now have (or use ) this new option from Google, the attention now moves to Apple. Will Apple be able to bring back the 10-plus million users into their application? Given that Google Maps will never be as tightly integrated into iOS as Apple’s maps – if Apple makes a massive improvement, things could change fast.