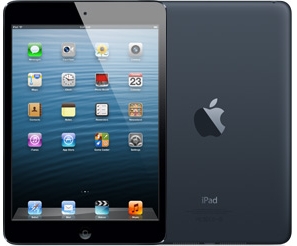 It was a just a matter of time before I was able to get my hands on an iPad Mini. In most cases, I will not review a device unless I’ve been able to use it for at least a little while. With the iPad mini, I had seen it maybe four or five times for brief moments in stores – but never as a daily device. I’ve had it now for more than a week now, and I can comfortably relay my thoughts on how it feels. After having the Nexus 7 for about six months earlier in 2012, it was going to be very interesting to see another 7+ inch form factor too. Is this going to be the de facto iPad of the future?

Light – So light, it might feel cheap if I didn’t know it was an iPad. Coming from using a first generation iPad every day; the Mini was much easier to hold in one hand, turn pages, and generally just read for longer periods of time without having to rest it on something. It’s really thin too; 7.2 millimeters thin.

A great screen – Much has been said about Apple’s failure to include a Retina screen in the Mini, but I found the screen to be more than adequate with it’s PPI of 163. Compared to the original iPad, it’s clear there was an improvement, but I’m not sure I need Retina that badly. It’s clear the next model will probably have the Retina screen as a major upgrade.

Reading PDFs – About the most important thing I do with a tablet is read PDF files. As you probably know, the range of information and formats in PDF files are often not well-suited for the tablet form factor. Combining a PDF of a webpage or book with the amazing GoodReader application is what I consider the gold standard for reading on any tablet. The iPad’s 9.7 inch screen allows you to see the whole page and read the text without zooming on every page turn  (a common occurrence on other tablets, I found). I was interested how this would look on the iPad Mini and I’m happy to say the 7.9  inch screen works very well. I’m not having to zoom pages at all with this. 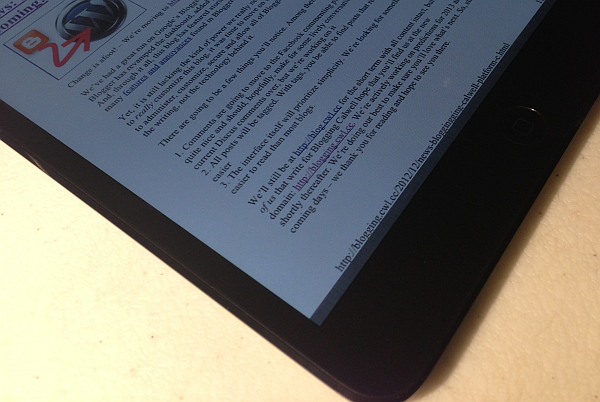 Everything else an iPad does well – It is important to mention that this is an iPad, so it does everything it’s larger cousins do. Everything from the touch experience to application experience to notifications and general iOS feel.

Some of the touch experience – The border around the screen is much smaller than other iPads and I found myself touching the screen when grabbing the device. The space between the screen and outer edge might not be a problem for those with smaller fingers though.

The screen is a fingerprint magnet – but, this is generally true with all tablets. In one case, while using the Mini all day on the job, many of my prints were noticeable while the device was on.

The Price – With all Apple products, price seems to be a common gripe. But, it is never more true with the iPad Mini. Compared to a Nexus 7 (at C$209 for 16 GB), the iPad Mini’s C$329 entry-level 16GB price is steep. Adding memory is a costly $100 for each doubling. Thought exact comparisons are difficult, the iPad Mini just feels like it’s too expensive. Compare that to the Microsoft Surface tablet, which is too expensive to sell, Apple is in a much better place.

So far, my experience with the Mini has been very positive. Reading books, PDFs, and comics are all as nice as I might have expected on an iPad, and the small form factor is much easier to move around with. It feels like Apple has another winner on it’s hands with this product. I can definitely see this becoming the biggest selling iPad model in the near future – even more likely if they get the price down.

A worthwhile video to check out, the Nexus 7, iPad Mini, and iPad go through some extreme activities (let’s face it, blending isn’t reflective of the real world). You’ll see the Mini stacks up well, and there are some interesting results when submerging in water.