With the recent announcements of Windows Server 2012 licensing and pricing details – much is welcome in the mix. In addition, the “Server Essentials” version of Microsoft’s server has just hit RTM. Not only are we getting more for less, but the server licence looks to also cost less. In addition, the Server versions are being simplified down to Datacenter, Standard and Essentials. I’ll take a look at all of these versions and the big missing piece, Windows Home Server.

Microsoft lays out it’s different server versions and pricing (in US Dollars) in the following manner: 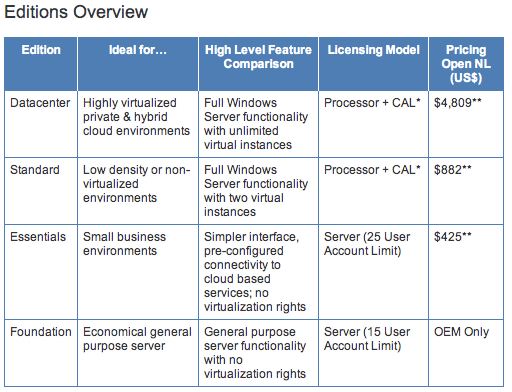 When booting up 2012 Essentials, you’re greeted with the Windows 8 Metro interface (I’m going to stick with that naming – everyone knows what Metro means). This is an interesting choice on the server because it comes with zero applications pre installed and a simple link to the store. It’s not quite clear why this was included, until I realized – this is probably for Remote Desktop compatibility.

The First startup forces you into a wizard that either creates or migrates a domain. This sets up all of the services required for domain operation from the ground up.

As it is, it’s geared to no more than 25 users (though I have seen details say 50).  This also might be the closest version users can get if they’re looking for a Home Server replacement. At a license of $425, this is definitely steeper than Home Server’s less than $100 price tag.