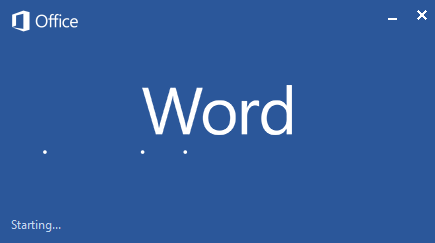 If you had to give business only one of the 9 or so applications in the Office Suite, there’s a goog chance most businesses would ask for Microsoft Word. So important is it to many businesses, that a typical user’s computer has Word running for the entire duration of a working day while opening and closing documents. With a recent release to manufacturing, we’ll shortly have a new version of the venerable word processing application. I wanted to take a look at what’s new, and what’s interesting in this iteration of the product. 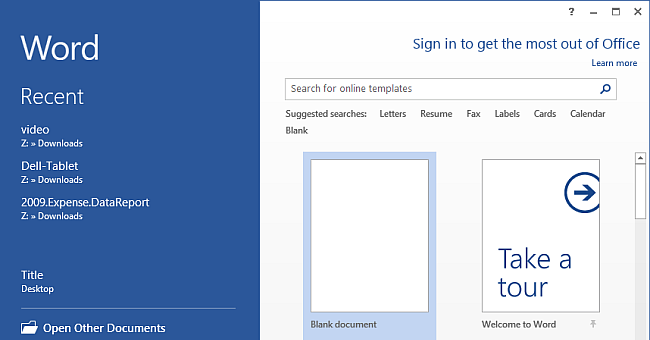 This may be destined for a great deal of hate, but Word 2013 is now going to open differently from other versions. Instead of being greeted by a blank document interface, Word is going to give you template options, sign in options and recent file listings. When you first see it, you’ll need a few seconds to figure out how to open an actual file. The fastest way in is simply by clicking on “Blank Document” to start editing something.

What seems to be one of the more interesting new features here is Word’s interaction with Adobe’s PDF files. Word 2010 was already able to save PDF files, but now Word 2013 introduces the ability to open PDFs and transform them into documents you can edit. Unfortunately, this process works as well as you might expect – OK to downright poor. If Word encounters parts of your PDF it can’t work with, it will just import one large picture of text. Testing with a number of PDF documents yielded so-so results. When saving the opened PDF file, you’re prompted to save as a Word file, naturally.

Morphing the web even more for documents, Word 2013 now supports the ability to “Add” videos to a file. While this is actually not dumping massively large video files into a document. Instead, Word embeds only the details on how to show the video – saving space. The user has to click twice to play the media and a full-screen player pops up with the video (using an embedded Internet Explorer interface, no less). You can use Bing to search of the video or use the standard embed code available on sites like YouTube and Vimeo. When opening these files with earlier versions of Word, all you see is a picture where you placed the video.

You’ll remember in Word 2010, there was a “Full-Screen Reading Mode”, which was fine for most purposes. In most cases I saw people using that when opening Word files from Outlook. Now, Word 2013 Read Mode takes this further with a nicer looking interface and re-flowed and paginated text (when needed). There is also an icon that let’s you hide visible toolbars, making this more like what you’d expect Word to do as a reader in “Metro” mode. But, of course, this is not a Metro interface, so don’t get too excited.

A number of  updates relate to viewing revisions in documents. While it seems more simplified, this may be a problem for those heavy Word users that rely on more complex document sharing and markups. What’s new and interesting here is that comments about changes can be replied to, allowing for something that you might see at the end of a blog article. Couple that with logins to cloud-based accounts and information about other users can be used to Email and communicate through other channels.

You might be worried about losing some features in this version of Word – well, you can breathe, because many of the same things are here still. The list of important tools still in Word 2013:

5. The nice print and print preview screen in Word 2010

On the surface, Word 2013 hasn’t changed much. The new start up screen is sure to annoy users, but for the most part this is really the Word you’re used to – with a few new things and a better looking interface. For those that rely on this application, they should breathe a sigh of relief – most of what you need is still here. For those looking for something new and cutting edge, you’ll have to look elsewhere. Users looking to start using word processing applications this year are likely looking for other, cloud based kinds of options like Google’s Apps or Microsoft’s Office 365. As a complement to Office 365, I wouldn’t recommend purchasing this unless you really need it (or offline file editing).