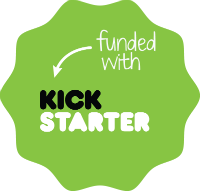 I’m sure you, like many, have heard about a crowd-funding site named Kickstarter. The key role of Kickstarter is to help fund creative projects in all sorts of industries. Surely, technology is a showcase there, but the site includes many other creative endeavours including films, fashion, photography among many others. The process of funding a project is done by offering rewards (usually the product) and having a goal (usually the cost of production). If the project receives 100% of its goal, those who have paid into the project, or “backers” are billed and sent rewards. Kickstarter takes a 5% fee on the total funds collected and the project comes to life. You might think this is like a shopping site, Kickstarter is strongly against being labelled as a store.  While the many projects I’ve come across have seemed interesting – today is the first time I’ve backed one. Read on for more about my experiences with this new idea in funding.

This wasn’t easy. I had known for a while I wanted to back something, , but it was difficult to find that one project that catches your interest. On Kickstarter, projects are given a single page to sell an idea. This page contains a video and a number of images, details and answers to basic questions. The content appears much the same way a blog article might look – so the project’s life depends on the quality and clarity of the information presented. If the goal is too high, the project may not get there. If the rewards are overly costly, the backers may not pay for them. The delicate nature of a project’s presentation is likely why most fail on Kickstarter (to the tune of 56%). 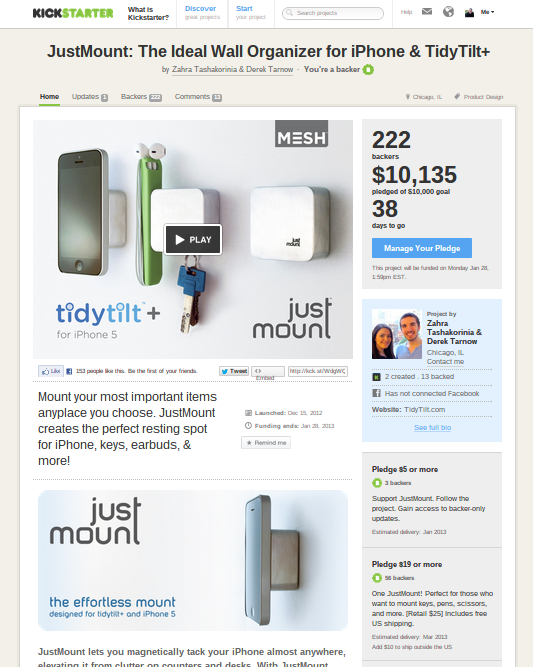 The project that finally captured my attention was JustMount.

Update: The makers of JustMount and TidyTilt+, TT Design Labs, were acquired by Logitech on June 6. The project itself is actually showing on the Logitech site.

This project is a mounting apparatus and case/cover for the iPhone 5. The device lets you magnetically attach an iPhone 5 and cables to a wall, effectively keeping them out of the way. It looked like a great idea, and something useful – so I wanted to find out more. After backing the project, I contacted the creators of JustMount and TidyTilt, Zahra Tashakorinia and Derek Tarnow to ask a few questions (by email) about this project and Kickstarter.

Did the company TT Design Labs come before, or after your decision to use Kickstarter? Did you consider building a design company to hold all your projects from the beginning?

We incorporated TT Design Labs several days into our first Kickstarter campaign one year ago (for TidyTilt). This project emerged from a graduate course we were both enrolled in at the Institute of Design. Part-way through the campaign, when we surpassed our goal several times over, it became clear that TidyTilt wasn’t just a school project anymore. We both wanted to continue designing products designed for the modern lifestyle.

What other funding options did you consider before going to Kickstarter? Are you happy with your Kickstarter experience?

The goal of the course we were in was to design and launch a product on Kickstarter that solved a problem. Tangled earbud cords were a problem we wanted to solve. So, from the inception of TidyTilt, we had it in our minds that we would be launching on Kickstarter. The experience was quite positive. We enjoyed the high level of engagement with our backers. Plus, it was a great way to test the viability of our product and branding before manufacturing. Because of our familiarity and success with Kickstarter, we decided to launch our follow-up products, JustMount and TidyTilt+ there as well.

As you probably know, most projects fail to achieve funding goals on Kickstarter. What do you think you have done differently that has resulted in your funding success?

As human-centered designers, we do our best to empathize with users and identify problems they may have. We think our two Kickstarter projects have resonated with users because we show the story of the problem from the their point of view. Our backers desire solutions to these common issues we face.

On December 16th, with the project about 60% funded, I took the plunge. The process of backing was fairly simple. An account on Kickstarter had to be set up, and they get you to pay by way of Amazon’s payment system. From there, the amount you choose (based on the reward and shipping cost [1]) is “authorized” on your credit card [2]. When the Kickstarter account is set up, you’re given a profile page that the public can hit to see all the projects you’ve backed.

For a time after funding had succeeded, messages were arriving that would describe delays in packaging and other minor issues. By mid-April, my interest in the product waned as the delays continued. Then, on May 27th, 2013, a package arrived by US Post and it was my new JustMount and TidyTilt. For those keeping track, this is about three months later than projected and a full five months past the date of successful funding. Clearly, delays in production are one of the hazards of backing a Kickstarter project.

The products themselves are incredible. The JustMount comes with the ability to mount on the wall with screws or a sticker and performs amazingly well while using the TidyTilt+ case. While the cover is not actually needed to attach the phone to JustMount, it’s nice that the magnets work outright to allow a mounting even with the cover on. I wasn’t sure that JustMount would hold my keys just by the ring, but the magnets were strong enough to do so.

There are a few nitpicks I have with these products:

1. JustMount needs to be in a location that you can’t possibly bump into. I found that the slightest brush up against something hanging might cause it to tumble. Because of this, attaching stuff like keys can be tricky, especially if you have a fob or the ring carries some weight.

2. Perhaps because of the iPad cases, you’re going to want to try to attach the TidyTilt+ cover to the front of your phone. Likely a source of confusion for some.

3. The JustMount a magnet (I had to) for scratches. That is to be expected for what it does, but some may not like it. 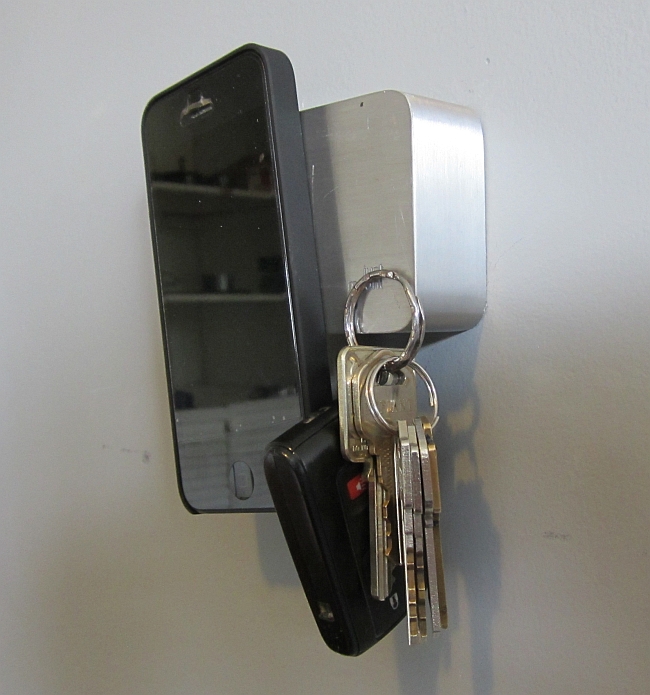 So far, I’m loving the JustMount and TidyTilt+ and plan to use these two quite extensively while I have my current iPhone 5. JustMount is a very well-made, and useful addition to the side of my desk (and, heck, I’m thinking of other places I can put others). TidyTilt+ is a cool case and I look forward to finding other ways I might use it. For others who have had one of these, I’d love to hear your experiences.