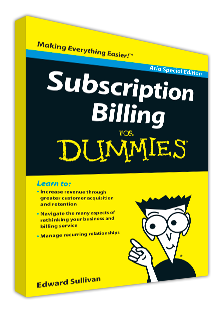 Recurring or automatic billing is simply the process of automatically billing a customer on a regular interval. Sometimes it’s monthly, weekly and even yearly. Generally, companies on the Internet love this type of billing because they get to store a credit card and bank on a regular income stream. That looks good on the balance sheet. Where it doesn’t look good is for the customer, as many of the companies I have encountered use repeat billing tactics to abuse the customer’s goodwill. I’m going to offer some serious sins companies make when billing automatically and suggest some ways to improve the process.

I’ll give you the worst sin first. Opt-Out automatic billing is the process of taking a seemingly one-shot order and making it happen at automatic intervals later. The worst companies will make the signals that say “automatic billing” appear in the fine print or in such small lettering in the online cart that you don’t notice it. If you would like this bill not to automatically come off your credit card, you’ll have to later – manually – contact support and request it. Companies that commit this sin are many, but Logmein is by far the worst offender. Dyndns also does some of this. Automatic billing should never be opt-out. If a company wants a bill to be automatically paid, that company should upsell it.

2. No warning that a bill is coming

Since bills that occur automatically are, by nature, easy to miss, one of the most serious sins companies commit relates to lack of information. The worst offenders will simply send a small email that the account was billed in the hopes that the customer won’t notice and carry on. If the email were to be relegated to spam or one of Google’s new sorting algorithms, all the better. Companies that commit this sin are all-too-common, but HotspotVPN is one such offender. If you are billing customers are regular intervals, build into the system a warning that a bill is coming.

3. Continuing to the bill after a cancellation

It is often not enough to commit the sin, but when the systems companies use make errors and no one takes action – the problem compounds. I recently cancelled an account with Mhub.com, and they continued to bill a month past the cancellation. When contacting them, the answers were lazy, unspecific, slow, and rude. For that reason, I don’t recommend Mxhub.com as a hosting company, nor will I ever return as a customer.  If you are going to automatically bill, your company has to build a process to catch and act on errors immediately.

4. Not having a contact number or hours of operation

Errors happen in business, but keeping customers depends on how you react to mistakes. Another sin committed by companies who auto-bill is to build a system that keeps the customer out. You’ve seen it before but might not have been able to pinpoint the problem. When attempting to contact support, you are given only email addresses or web-contact forms. Street addresses and phone numbers seem absent from pages. When contacting support, the email they use is always a generic “support@poorcustomerservice.com” or otherwise. Response time on these forced electronic submissions are laughingly long (considering how fast email travels). The biggest companies like Google and Outlook.Com (formerly Hotmail) are the worst offenders, but smaller businesses do this too, like Mxhub.com. If you have a process that automates billing, your support structure should be built to include real-people contact.

While it’s clear that this practice isn’t going anywhere, companies need to learn respect for their customers. As the problem of information overload continues to challenge most of us, companies need to be more helpful in combating this problem. We all need to support companies that are going good work and respecting customers and pulling our money away from those that don’t.