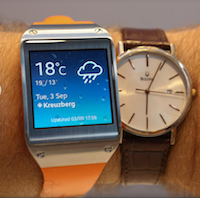 Yesterday Samsung launched the Galaxy Gear, a new $299 “smartwatch” that pairs with a smartphone to deliver updates and notifications right to the wrist. Samsung hasn’t exactly created the market for smartphones but appears to be attempting domination on watches that connect to and act like phones (to some degree). The Galaxy Gear is big, square, has huge screws on each corner, and is just ugly. But, you can be sure they’ll iterate and improve the design of this product. With talk of a “smartwatch” from Apple too, I thought I’d look at what I’d like to see in a device that will likely define wearable technology in the future.

In Short: I look at the newly announced “smartwatch” from Samsung, and describe what I think would be the most disruptive of these devices (if it were ever created).

I don’t wear a watch. Over the years I’ve had watches, worn them and loved to shop for them [1]. A few years ago, something changed the way I looked at telling time. The smartphone began to converge everything – email, music, web browsing, reading and then time. When the phone you have always can tell you what time it is, why attach a device to my arm to do the same thing? [2]. My feeling is that more and more people are taking this approach to watches, relegating the device to a fashion accessory.

This is poised to change, as the largest technology companies embark on wearable computing devices. Google has Glass, and Samsung will have a watch. Some of the Gear’s specifications read much like a smartphone:

And, you’ll need a Samsung Smartphone to pair with and control the Gear. Talk about lock-in. I would expect Apple to do the same with an iWatch.

With the rise of this new form factor, I thought it would make sense to write out the types of things I’d really like to see in a smartwatch. To be a compelling mass-market product, it’s going to need to become a very compelling (and possibly convergent) device in its own right.

1. Stylish: People are going to need to have colour, size, and band options to style the device. A watch is considered by most to be a fashion accessory.

2. Independence from a smartphone: The phone link is great for controlling the device, but the watch has to be highly functional without a phone. It may link ad-hoc to the phone for transient data, but getting and using things like music, podcasts, videos, and readable data to the device should be easy and viewable without a link to phone.

3. Battery Life: The small form factor is going to be killer for a wrist-sized wearable’s battery life. I expect this will be the biggest challenge for a smartphone maker to overcome [3].

4. Medical Functions: I mean real medical functions. Sure, add the ability to track steps, but a really amazing smartwatch will converge medical features into a device that sits on your skin. Features such as heart rate monitors, a breathalyzer, and I may even be going a bit far, but having the ability to take blood samples for diabetes tests and other basic blood-related details. As the population ages, a smartwatch/heath monitor is a very disruptive device.

5. Authentication Systems: In the same vein of health monitors, the smartwatch’s proximity gives it the ability to take biometric information (such as a heart rate [4]) and translate that into a unique signature that could be used in authentication systems at the swipe of the arm in proximity. This could also be used in identification systems, medical history (on the watch) storage, or even loyalty cards attached to the user.

6. Location Systems: The possibilities of a watch-enabled contextual system are countless from monitoring the location of your disabled family member to track where your child is swimming at the lake. The smartwatch on a person’s arm may be more functional as a GPS monitoring device as satellites become harder to pick up. Having this quick and easy meshed with your navigation system may provide a more accurate reading of where you are [5].

Those are just a few ideas. The likelihood of a smartwatch or bracelet device becoming as common as useable as smartphones are quite high given the right product. I would expect Apple to do something that changes the game, and then we’ll all be wearing one of these things. Until then, the Samsung Galaxy Gear is available in the US from Amazon (pre-order at $414.10). No word yet on Canadian availability.

1. The best watch I ever owned was a Breitling Superocean.
2. I know, I know, it’s a fashion accessory. I’m just speaking from a utilitarian point of view.
3. Would you wear a watch that has to be charged as often as a cell phone (every day)? Neither would I.
4. A company’s already trying to do this. Seriously.
5. Finding satellites seems to be getting slower too. In emergencies, these seconds count