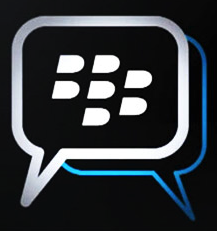 With all that has kept Blackberry from releasing its Messenger tool (BBM) on the iOS and Android platforms, it might be no surprise to see the product scrapped. To get from an expected launch to an eventual install it would take almost exactly a month. Blackberry has publicly blamed all this on a re-release version of the tool on Android, but little else is known. Now that I have BBM, I can share my thoughts on this new tool, and how this may affect the future of other related applications.

When the launch resumed on October 21st – I had been part of the group who pre-registered, so access was straightforward. I simply had to enter an email address, sign up for a Blackberry ID [1] and I was into the tool with a PIN. I’ve noticed lots of people posting PINs online either as a barcode, or even screenshots of it on Instagram. I’m not sure why folks are doing this – but when (and if) an insidious sort of BBM Spam rises, those folks will be sorry.

When first running the tool, it was fairly apparent what I had to do. The first screen that shows up is a button that allows you to invite someone. All told, BBM for iOS allows a user to invite a contact by way of Barcode, PIN, Email or SMS – pretty much the same thing you’d expect on a Blackberry. As the tool started to roll out, it seemed clear Blackberry was keeping people waiting; Up to three days for some. BBM appears to be a huge success, with some 10+ million users already. After a week, BBM users had totalled 20 million. 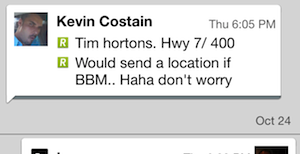 What I’ve noticed so far, is what’s missing. BBM on iOS cannot send a location to another BBM user, while BBM on Blackberry can do this. When a Blackberry user sends a BBM iOS user a location, a small empty space shows up before the next message. To the average user, this omission might go unnoticed, but I saw this pretty quickly. Messaging tools such as Whatsapp have included the ability to send a location for some time.

In time, I’m sure other platform differences will arise. Have you seen any yet? Let us know in the comments. 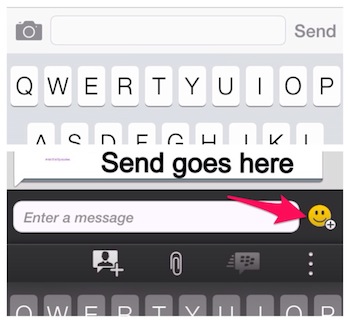 Another interesting thing about BBM is how it appears to circumvent iOS interface guidelines. When sending a message or writing text, the end of a text field is usually the location you find the send button [2]. Because BBM places a smiley chooser button in that location, I’ve found myself clicking on the little smiley out of habit; and sometimes forgetting to actually send the message. Blackberry has decided to place the send button on the bottom right of the keyboard, which is not typical [3].

Perhaps even more jarring is the use of menus that fly out from the left or right based on touching a location. Blackberry’s BB10 interface uses these elements to decent effect, but they look entirely out of place on iOS. I wouldn’t be surprised if Blackberry’s developers had some serious crashing issues while trying to replicate this behaviour.

While my nitpicks are just that, nitpicks – the BBM application is useful, functional and has not yet crashed on iOS 7 [4]. A useful, powerful, fully cross-platform messaging tool has really been needed to reach those uses who have been on Blackberry but unwilling to install applications (like Whatsapp). As it is, BBM is and should become the dominant quick messaging player on the currently popular platforms. I feel this application could become a future line of business for Blackberry if they can find a way to monetize the tool.

That should be the question we’re all asking right now. How will they make money with this?

1. I’m told Blackberry had done some nice workaround streamlining account requirements much like the Apple ID. I have hated this process on a Blackberry.
2. Or, now, a hyperlink in iOS 7.
3. On iOS apps, that location is for the “Return” (newline) key.
4. An update for crashing on iOS 7.0.3 appeared recently too