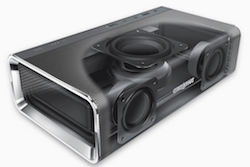 Here at CES, there are quite a few hot products and interesting announcements, but some of them kind of hover under the radar. I would generally never get excited about a wireless speaker, but after spending a few minutes at the Sound Blaster booth, I could tell this product was something. Slated for release in the spring of 2014 for an aggressive MSRP south of $200, the Sound  Blaster Roar looks like something I’d want to have.

The Roar is a small booklet [1] sized wireless speaker system that seems to be well suited for filling a room with sound. The device has all the sorts of connections you’d expect from a wireless speaker including Bluetooth and even NFC connections. Included also are a 6000mAh battery and a USB port that charges your smartphone or device (great for extending the music listening). Another nice touch is the inclusion of an SDcard that can contain music for playback, so you don’t need a phone or iPod.

When I saw the Roar, I was impressed by the sound and heft of the device. The booth at CES even had 8 of these running in parallel to create a huge wall of music. The quality of construction seemed quite nice too; especially for a product type that seems to have become overly saturated.