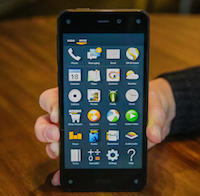 I’m coming into this a bit late, but I feel like it was important to digest all the information about this new phone. If you missed it, last week Amazon announced a new Android-based phone named “Fire Phone”. This ultra-super-secret phone was probably an inevitability, but until it was announced, nobody really knew for sure. If you thought this was shades of Facebook Home, you would be right. I thought I’d take a look at what’s good, and what’s bad about Amazon’s announcement.

For the specification geeks, you can get your fill over on GSMarena, so I won’t repeat all that here. This is a current phone, so naturally you would expect the specifications to reflect that. Of note is the 4.7 size and a very capable camera at 13 megapixels. Since I have not held this phone, I’ll need to reserve complete judgement until then; but, I’ll let you know what I think the future holds for this beast.

1. Unlimited cloud space for photos – A bold move by Amazon to make this 13MP camera a cool and useful tool for enthusiasts. It would be great to know you can take photos as you wish and not worry about space on either the phone or in the cloud. If only Amazon could make photo management and sharing as accepted as Flickr.

2. Specifications – Some of them are fantastic. The phone looks kind of plain-Jane, but cell frequency support here is amazing, the camera looks great and it shoots 1080p video. The phone even support the 802.11ac WiFi standard. It’s screen uses Corning Gorilla Glass 3. So, some of these details are not bad for a phone.

1. Flashy interface that doesn’t appear to have much utility – And, this is a really bad thing. Nothing dooms a device more than a feature that no one wants, and if the 3D Dynamic Perspective UI doesn’t catch on as a game platform – this will spell trouble for the Fire Phone.

2. Linking the phone to selling stuff – This may not be so bad if using the phone on a regular basis, but it appears as though the Fire Phone is built to sell Amazon stuff. There is even a button expressly for this purpose. What Amazon doesn’t get is that the phone comes first, not what they’re selling. Even worse, countries outside of America have garbage selection in the Amazon inventory, making the Fire Phone even less useful. If this phone is forever linked to Amazon’s products, expect demand to be low.

3. Aping and further fragmentation of Android – For those millions that currently use Android, Amazon’s Amazon Fire OS v3.5 will probably not be welcoming like a warm blanket. Rather, the controls will look different, the dialer appears to be weird, the browser is not Chrome. What’s more, you probably won’t have access to the Google Play Store. For this reason, many may avoid this phone.

4. Stereo Speakers – Stupid people will pay for this thinking it makes a difference having “stereo” and “surround sound” on a 4.7 inch phone. Seriously, it’s a phone.

5. It costs $199 (even on contract). For a phone that appears as a conduit for Amazon purchases, you would think it should be free on contract. Not to worry; I suspect this will be the case in the near future.

As it stands, I wouldn’t buy this thing, nor would I recommend you do it. Are there die-hard Amazonabies? Yes, and this is probably for them. Perhaps this could become a manager for all things Amazon (EWS, store fronts, etc), while allowing you to buy from Amazon regularly. Could this be the dawn of having multiple smartphones in our pocket? No, probably not. No one knows how the public will take to this device, but this phone looks like a dud.

The Amazon Fire Phone is not yet available, expect it to arrive later this year.