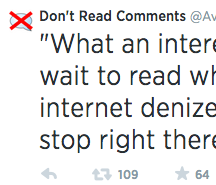 With news of The New York Times, The Washington Post, and Mozilla working together to create an “audience engagement platform”[1], I was interested in this time-tested idea of how “broken” commenting systems are. Dave Winer is also talking about this, and as you might expect, I mostly disagree with him. The thing is, commenting systems are not broken, they just suck. We may currently have the best we can get from the text-based system, but the work should be spent on making them suck less.

All of this talk about how there’s too much “noise” (us non-cool people talking) over that of “signal” (the experts), is just pure bullshit. I have always thought, anyone who has the wherewithal to speak up, should be allowed to do so. This sometimes leads to things in directions the original article didn’t intend, but other times it can enhance and sometimes correct a blog post.

Are comments important? Many would say no, but I think the spirit of engaging a readership is to offer them the ability to speak up. I don’t like bad actors in this mix, but the best solution possible is to moderate this activity. It takes more time, but it generally ensures the lowest quality comments are left out.

How do commenting systems suck? Today I encountered an odd issue with Facebook’s commenting platform. If I replied to a comment in the administration approval interface, my own comment was marked as not visible [2], and could not be made visible. What I had to do was load my blog, with the commenting system embedded, connect through Facebook, and add the same comment to make it public. I’d say that’s a significant bug, but who the hell are we supposed to tell at the Facebook monolith?

As a blogger, I’ve probably seen and used most of the commenting platforms out there. Each one of them has their own issues, problems, and uses. For a time, I used Disqus and it was useful, but I wasn’t pleased enough with it to keep it. Naturally, every time we move to a new commenting system, all the comments on the past system are gone. We just can’t get this thing right, even when it’s just text.

Today, the problem is that comments are regulated to the bottom of a blog post, and are generally just text entries. For the lowly WordPress blogger, there aren’t many other ways to enhance your blog’s level of commenting options. Out there, commenting is evolving; just look at Medium and how comments are off to the right of a blog’s paragraph. There’s a feeling of more interactivity with this approach. Can a WordPress blogger implement that? Not that I know of.

This underlines the bigger point, commenting systems need to be bigger, better, and evolve faster. The fact that we’re still stuck on text-based comments as a whole really sucks. It’s laughable considering how many touch-based devices are out there. Today, a user’s interaction with a blog should encompass every annotation option they have. This might mean they add squiggly lines all over my blog post. This may mean they replace pictures. This might mean they add links and even entire paragraphs of text inline. Rewrite my blog post even. Really? Why not. I may need to approve the activity, but I see zero reasons why I’d want to stifle someone interested in engaging my thoughts if they’re doing it reasonably and respectfully.

Where is that commenting system?

1. Fancy, for commenting system
2. Without a notification!