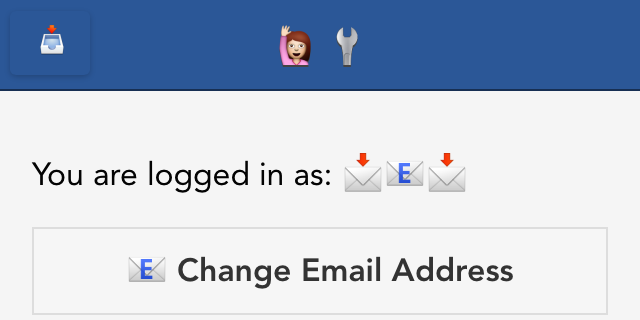 Communication is a challenge on the best of days, but what if we communicated only in small graphical characters? How would that change the way we talk to each other? A new service called Emojli opened up to invitees that only allows its users to talk with small graphical characters called emoji. These small characters are generally reserved for expressing a happy face, a kiss, or a pile of poop. Emojli is a chat service that forces us to talk in only these characters. Yes, really.

Briefly: I take a first look at Emojli, the first emoji-only chat service and look for someone to chat with.

The idea behind Emojli is the same as other sorts of chatting programs. You find people to talk to, and add them as a connection. Other chat programs (such as Whatsapp) identify people by phone number, and (like Facbook) identify us by name or email. Emojli is different. Each user is identified by a name written solely in emoji characters.

For example, my username is simply two envelopes (with down arrows) wrapped around an envelope with an “E”. You’ll also find these characters in close proximity on iOS, and that’s by design. I can imagine some people’s usernames might take a few minutes to write out if a person didn’t know where every emoji was.

If you’ve ever experienced the frustration of hunting for a rarely used character on a keyboard, you’ll know what it feels like to work with emoji characters. Each small icon sits on one of some 41 pages of icons on a typical iPhone. Some of these icons are very common and easy to find, but others are so unusual and obscure, that “hunt and peck” barely describes the agonizing process of failing to find an emoji.

My sense is that this form of chatting is meant to be fun. We’re not going to be calling emergency services with emoji characters anytime soon. In the name of having some fun, and trying to decipher what another person is saying, Emojli may right for you. For the rest of us, this may exist solely as a curiosity.

What do you think? How would you fare communicating in emoji? Here’s a short video explaining the service.

Emojli previously asked people to reserve a username. On Aug 29th, 2014 the invite-only service released an iOS application and opened the service up to all invited users.