When I joined the writing team at MovieViral in late 2013, I had aspirations of writing about the other topic I enjoy: movies. My interest was twofold; Get some experience writing for a larger site, and eventually work toward earning money for that work. For a time, the writing was difficult to keep up with, but I persevered. Eventually, the site would sell to a new, British, group. In return for supporting them, they would steal from me. Let me explain.

Who is this British group? That would be James Murphy and Robert Sugar who run a company called Crocutta R&D out of the U.K.  Since at least April 19th, 2015, MovieViral has removed all information about previous article authorship. This includes any references, bylines (excluding those bound to a user’s name [1], or manually inserted in articles) to writers of the previous group and any new group. In other cases, an attribution that had been included in articles was stripped away [2]. They continue to use (or steal) and earn money off that content.

Take a look at any of my previous articles. Each and every single post is missing my authorship. The contact pages also show no description of me as a contributor, no link to any of my personal pages or here. They’ve essentially wiped away any sign of me as a contributor. And, just in case they’ve changed any of this later, here’s an archive of the many articles, and the obviously missing attribution [3].

While there and working with them, I actually made a concerted effort to bring the authorship display back (by editing the current theme’s source code). But, every time I did that it was removed. I didn’t speak to them about why, but there were quite a few things going on at the time, so it wasn’t as big a topic of conversation as it should have been.

The tough thing is when writing for the old owners (and new ones), not once did they offer to compensate me. I made it clear (to the new owners) that I wished to be compensated. While working to get the site back to a usable state, not once did they offer to pay me or include me at a level that would provide future payment. Empty promises were an everyday occurrence. I even offered to buy the entire site in hopes that I could build it and earn back my investment of time and energy, but that was rejected.

What’s more, I developed, wrote, and published at least 48 articles for MovieViral. I published a total of 20,247 words for an average of 422 words per article. For this, they paid me nothing. If I were to be paid a very reasonable rate of 12 cents a word, they would owe me $2,429.64.

I have to imagine this will catch up with them soon enough. These sorts of horrible tactics may be commonplace in their world, but I’ve learned that the Internet can be very unforgiving when you’re a shitty person. I can already see MovieViral‘s quality is waning, while reader sentiment seems brutal.

@MovieViral yeah, it will. Enjoy destroying a site that was near and dear to my heart you useless piece of shit.

So to add insult to injury: They’ve stripped me of all involvement, and then they essentially scrubbed my name off every article I wrote. Great move, guys. This content is generating views and revenue for them, while they walk away smugly, presumably smiling right to the bank (on the backs of every real writer they aren’t crediting). Am I disgruntled? Of course, I’m pissed off. In fact, for a time, while they continued to be dicks, I had full power of their systems and caused no harm to them. Every day, they continue to host my work unattributed and unpaid for. Yes, I did the work for free and, sure,  I hoped to be paid one day, but never agreed to being stripped of credit for my work. That was the last straw!

Have you returned to MovieViral recently? Have you noticed a change in quality? What are your thoughts about this?

Update #1: That didn’t take long. Robert emails me with a threat of police action (or something else?). I’m not sure what his threat is, but clearly, he seems motivated to remove the content they’re using without attribution. I wonder if they feel that way about all the other author’s work they’ve been hosting without proper credit? He seems to think I consented to let them take my work, strip away my name and sell ads on top of it. Maybe they should be calling the police on themselves? Regardless, it isn’t clear what he wants here [4]. 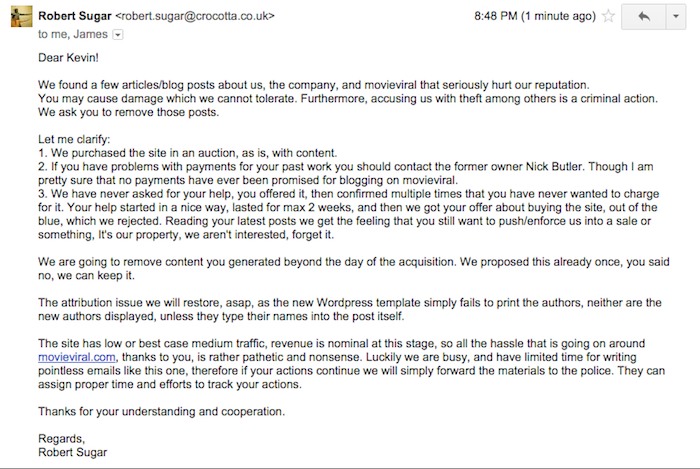 While clarifications are in order: If you take my work and use it, don’t pay me for it, and hide the fact that I wrote it – yes, that’s stealing from me. The writer.

Update #2: I didn’t know this before, but it appears the final writer, Caleb,  from the old MovieViral site has left acrimoniously. At this point, it seems like everyone who used to be there left on the worst of terms. This is obviously a pattern.

Update #3: In a strange turn of events, someone created a Twitter account named @JJPMovieviral, started to send abusive tweets and make changes to the MovieViral Instagram page (now, set to private). This included posting an image of me and calling me a douchebag. Later, that Twitter account would be taken down. 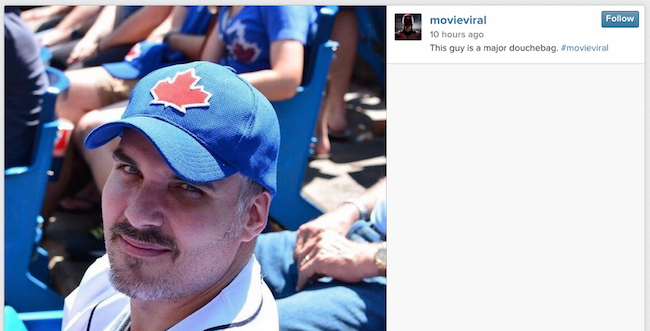 They seem to have appropriated the MovieViral logos and even have listed a domain called imissmovieviral.com on the Twitter account, but it doesn’t seem to be active. It is, however, currently available.

Update #5: As promised, it appears as though Robert or James have taken down older posts I have written prior to the acquisition. If he was wondering, I don’t give him permission to use them. Also, the article bylines have returned. That’s great news for the other writers at least.

Update #6: While changes appear to have happened, underneath the surface, Robert and James’ true intentions can be found. In one particularly egregious case, “James Murphy” is listed as the author, but he did not write any part of the piece. I did. These guys are like super-villains from a Bond parody.

1. That will be next, I’m sure. They’re paranoid and slimy like that.
2. I did a few “layouts” because James isn’t so good with those “dang ‘ole computer things”.
3. Or, check out the Wayback Machine. It archives that site all the way back to 2009.
4. Maybe to be loved more. Robert, you’ve been really shitty to me for everything I did for you, but I still don’t hate you.