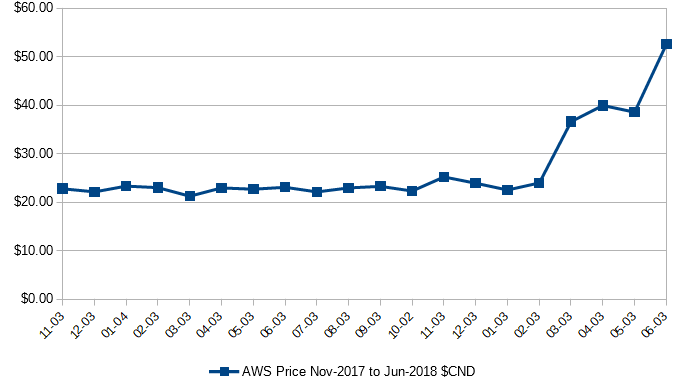 Over the last few months, I’ve noticed the costs of AWS rising steadily.

I really hit an inflection point: High cost of AWS hosting, dwindling or nonexistent ad revenue, slower and slower WordPress, and less blogging period. I’m not deserting this blog by any means, I guess I’m just being pragmatic about it.

The high cost of hosting this on Amazon’s Elastic compute has become absurd too. For a number of years, AWS has had a consistent price of about $20 – $25 CND per month. For most of that time, it was easily offset by Google Ad earnings, so the net cost of hosting was always about zero. Then in February of 2018, the price started to creep up. First over $30, then over $40 and even now over $50. I went back to check that I’d been billed properly every month (and that wasn’t just an accumulated cost), and the credit card was being charged.

The big question here was why the price increase when the news seems to always be about a price reduction? One possible answer for this is the new pricing model introduced at the end of the year. I’m not sure what a “spot” instance is, but perhaps that has increased all other costs. Looking at the billing closer, most of the higher costs center on EBS and the line item “$0.05 per 1 million I/O requests – US East (Northern Virginia)” which double from April to May of 2018. Could this be something in the way they calculate or something on the server going crazy? Could this be that a WordPress update queries MySql more often? A quick look at processes on the server doesn’t seem to show high usage. More investigation was needed clearly, but I also needed to move past this.

One approach could have been to increase the resources available or move to a larger instance. But, in so doing I’d probably just pay more money. That’s kind of crazy. Amazon makes a lot of money off these things.

Ad revenue has taken a hit too. I use Google’s advertising platform AdSense (or whatever it’s called now) to serve ads as unobtrusively as possible. Also, I have a few YouTube accounts that would get a meagre amount of views. The Youtube ads would bring in just about enough over the top to cover the costs of AWS and sometimes more. But, as things change, Google has been siphoning ad revenue from smaller accounts. First, it was ripping ads from Youtube accounts that “a total of 1,000 subscribers and 4,000 “watch hours” over the last 12 months”. For a smaller account as we run, this of course would make that ad revenue zero. Couple this with my posting frequency much lower because of other things, and this meant much less add revenue.

The blog has also become as slow as shit. Like, really slow. I’m not sure if this is a product of feature creep in WordPress, or if it’s a problem of diminishing returns with AWS, but the speed of serving pages and editing content has become so damn slow that’s it’s impossible to recommend, especially not for the $55 a month I’m currently paying. Adding and viewing images in WordPress has gotten insane too. When viewing the library on the dashboard, this could take up to 10 minutes on AWS. Naturally, I’d spend zero time in there editing, preferring to get things out elsewhere and then uploading everything after hours. I still do this.

There are other changes too. I’ve changed from a Digicert certificate to a Let’s Encrypt wildcard certificate. That feels like a far better solution here while also being free.

This new iteration of my blog runs on a self-hosted setup much like Amazon, but I control things. Posting articles is much faster as well as the blog itself. I’m not yet sure how I’ll work out the rewrite URLs, but if I can’t get them lined up well enough, SEO would suffer, not to mention other parts of this system. That’s not good, but I’ll have to take the hit and hope Google comes back. For now, this a test over the next few days to see how this goes.