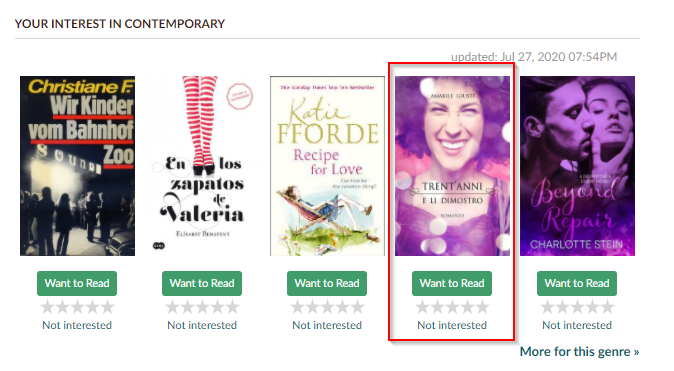 Hate for the book-tracking, Amazon-owned Goodreads is near-universal. Since Amazon purchased the tool on March 28, 2013, Goodreads has languished in a kind of purgatory that would have doubled over any Google moonshots (Google loves to shut down stuff). For all its pains, Goodreads is so frustrating because it has value. Any attempt to improve our experience as book readers has to transfer over this value to be a worthy replacement, but none have come along. Let me get into this a bit more though.

The most pained and mentioned thing wrong with Goodreads is the interface. For me, it’s mostly useless. But, just about the worst offence, Goodreads commits against its users is the Trojan-horsing of ad clicks. Here’s what happens, you find and load a book, the page loads, and for a sweet second, you see the book you want to share or double-click on the name. All of the most actionable controls seem to rest near the top of the page and they exist there, suspended for a brief moment.

Then! Pow! an advertisement loads from the time it takes you to get your finger to press down on the mouse. The ad slides in effortlessly under where you intended to click – and off to a new site you go. This interface trickery is shady, yes, but it also makes the site untrustworthy from a usability standpoint. I’m always loading it and waiting for a second to see how big that ad is going to be, and how I’m going to have to adjust to its obnoxiousness.

And, that is the core reason I hate Goodreads.

A thing I used to love (and use a lot) was the “Update progress” feature. As I’d push page numbers to Goodreads, the site would tell me where I’m at with the book. Great, 35%, I’m making meaningful progress here. I soon realized this wasn’t really worth all the effort of the constant updating. Even worse, pages didn’t always match the actual content of books I read, especially in PDF format.

Book ratings and reviews also seem to be a central theme on Goodreads. I really could give or take these features. Sometimes I just want to signal I’ve read a book and do no more work. Other times, I have much to say and would like to surface that more. Goodreads is not built very well for that. At best, the 1-5 rating rules, with a dash of review-age on the side if you want it. For the most part, ratings seem to be a limited view of a reader and mostly red-herring.

When I click on recommendations – I get a generated list of books that seem to be mostly useless. This is mainly based on pulled-up categories and doesn’t “feel” useful. As you might imagine, I have never picked and read a book based on these “recommendations.” Some of it is inexplicable, like mentioning I read “Trent’anni e li dimostro,” which I’m sure is a wonderful book, but in Italian, it might be hard for me to read.

Recommending books is hard. I don’t think it can ever be done so well that a person could depend on it for every book read, but I think it could be good. Where I’d start is simply the accumulation of data. Have a good view of a user’s reading habits from book to book (I’ve given Goodreads 225 of the books I’ve read so far. Some of them with reviews, most of them with ratings. All of them with the time I took to read. From this, the work is to extrapolate why I moved from book to book. Why, for example, did I move from reading Snowden’s  “Permanent Record” to “Attention Seeking” by Adam Phillips. This is probably easy for an algorithm because of the general topic of public and private lives. Harder still,  is my jump from Sam Harris’ “Free Will” to Jerry Thompson’s “Why Photography Matters.” Both are topics that Goodreads would well-understand I liked, but how could the engine take me to my next interest if it doesn’t know I want to go there at the time? That’s a tough one, and, as I see it, this stuff can never be bang-on; just good.

Why is this so bad? Goodreads is offering me books I don’t want to read and it’s not digging into the “why” of what I like. One of the promises of The Storygraph (see the NewStatesman’s article/ad for it) is that it seems to be after more of the why, and less of the genre.

I’ve been using The Storygraph beta for a few days and it feels promising. The interface is snappy and there’s a promising little twist animation of the book I’m reading. it feels like they’re winking at me, asking me to update them somehow. So far, everything I’ve searched for on Storygrah has been there, and the interface to add books works reasonably well. I’ve also gone through the data import process and that was fine. There are things that undoubtedly be improved as the product matures (including social aspects), but it has promise. Since it’s in beta, this could go anywhere.

Also, another mention for Bookhype, a speedy site that supports tracking reading, clean reviews and a good amount of details on each book. I’m liking what I see so far.

The power of Goodreads seems to be its data. For readers and writers alone, Goodreads holds a lock on so much book, rating, reading, and other user data that it seems more criminal to waste it like this. Could another tool have that kind of data? Not likely. Could another tool do it better? I think, yes, but that search continues and this seems to be a problem waiting for a good-to-great solution.