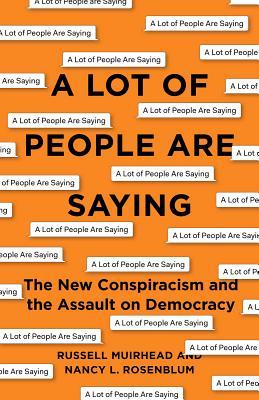 Given the election season of 2020, I wanted to dive deeper into the divisions that have stricken the U.S. I thought this book might shed some light on the issues of the day. A Lot of People Are Saying: The New Conspiracism and the Assault on Democracy by Russell Muirhead, Nancy L. Rosenblum felt like the right book for today’s wild political climate.

Right from the beginning, you know most of this book is about Trump (I don’t even have to say his first name). From his catchphrase in the title to the orange cover to labelling him the “conspirator in chief ” in the introduction, I knew where this was going. All that was missing were the small pop-up hands in the book’s center pages. So, yes this was going to very critical of Trump, but are we going to also get a deeper examination of hive mind conspiracies and divisions? This was my hope.

The point about Red Sox fans and their ambulance to The Yankees hit well:

With respect to the Yankees, the question of justified belief does not arise for RedSox fans, at least not in a philosophic or scientific way. It arises from a tribal context, where validation comes from repetition by those in the relevant community—in this case, RedSox Nation.

Conspiracism is not skepticism. Positions are taken in the context of the needs of one’s tribe.

The term that seems to fit here is “Intellectually slothful.” The constant barrage seeming falshoods, doubt-riddled ideas and generally smartly packaged stupidy seems to be eroding democracy, so the authors say. And when that mind demands that its reality be accepted, we are embattled by an assault on our sense of what it means to know something.

So, even with this book, we don’t have a definitive answer on how to face this scourge. I do wish it delved deeper into the beginnings of some of the more crazy theories such as “Pizzagate,” but as a short look at these problems we now face regularly, this book does well.