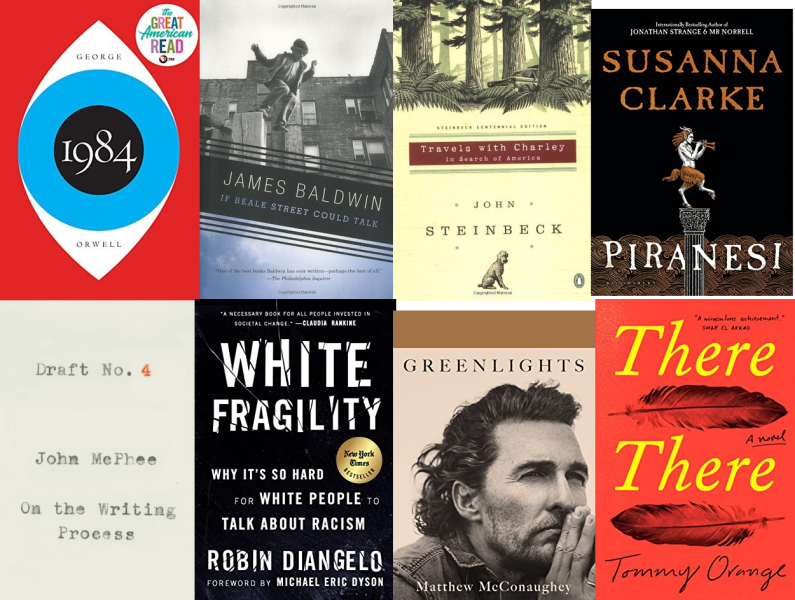 A year has come to an end, and with it, a year of reading. This year I’ve read more than 120 books published in several generations. Reading old, new, printed paper, electronic, or audiobook, I work hard to make use of a spare moment to dig in. With my reading, I’ve also tried to review books more here and most recently on Instagram at @cwlmedia. Reviews and not-taking, in general, can be challenging on the best of days, but doing it has helped me make better sense of books I read and pass on thoughts to others. So many of the books I choose to read are good, but some really do rise above and are worthy of more attention. So, without further delay, here are the best book I read this year.

The classic novel of surveillance and totalitarianism. In a year that brought us a virus and government controls (both good and bad), it seemed like a good time to read Orwell’s seminal work given the many controls we’ve faced sue to COVID-19. I was pleasantly rewarded, and if you haven’t yet read it, you should. Doubly so for the classic by Ray Bradbury: Fahrenheit 451. I read this one late in the year and was blown away.

If Beale Street Could Talk (1974) by James Baldwin

The issue of race relations in Canada and the United States has been simmering to a boil this year with the murder of George Floyd and much-needed attention on Black Lives Matter. I read several books on the topic (including the great Caste: The Origins of Our Discontents), but Beale Street impacted me the most by far. A moving story told through the eyes of nineteen-year-old Tish as she navigates a very racist world.

Travels with Charley: In Search of America (2002) by John Steinbeck

A travelogue from Steinbeck wherein he and Charley, his French poodle, drive across the United States in the 1960s. It’s a very basic setup, but the joy in this book is much like the joy of travel; it’s in the journey. A book of introspection and love for his native country, Travels with Charley will make you yearn for the open road.

Local communities are full of interesting characters. Bars in the United States are where you’ll find many of them, and Terminal Bar chronicles one such New York institution. The tapestry of grilled faces and worn-down souls on view in this book is astounding. The pre-gentrified character of this place, and of this city just shines through.

Draft No 4 is a book about writing, but one that isn’t trying to teach you grammar rules or word choice. McFee, a legendary writer and journalist instead offers some wisdom about what he’s learned. Each short essay operates in service to a central specific idea. One chapter named “Structure” looks at how to build things, another “Frame of Reference” looks at how one might use metaphors better.

The chapters on working with editors are particularly amusing. John shows that fighting and editor is but right and futile. Maybe both and maybe neither. Peppered throughout the book are great lines such as this one: “Ideally, a piece of writing should grow to whatever length is sustained by its selected material—that much and no more.” This is such a wonderful book on the craft that I now keep it as something to refer back to in my own writings.

White Fragility: Why It’s So Hard for White People to Talk About Racism (2018) by Robin DiAngelo

The defining of racism here is useful and fundamental; it does seem we throw around the words a lot. DiAngelo explains that prejudice is a pre-judgement of someone based on little or no information but, say a person’s skin. Discrimination then is that action that comes from prejudice. The action might be very subtle like talking badly about a person or group, all the way to violence. I imagine this sort of thing in media; the news anchor speaks in a disgusted tone when talking about African-American choices. When the group’s prejudice is backed by the power and legal authority, then we have racism.

This useful way of looking at racism allows us to understand why some black people do well in America despite racism (they can swim against this tide). It also explains why black people can hold prejudice against those considered white but cannot be racist (they do not possess the system’s authority to do so). For example, and I have seen this point of view from white-Americans first-hand: “The racial ideology that circulates in the United States rationalizes racial hierarchies as the outcome of a natural order resulting from either genetics or individual effort or talent.” This is the kicker – and I agree: “The dimensions of racism benefiting white people are usually invisible to whites.” As a secondary effect, this book should help you suss out the way media outlets that tend to lean right enable racism. It’s a bold claim, yes, but it’s there in media if you look. If you see the media they’ll say that “white fragility” is all-or-nothing and that seeing society as favouring whites is “like saying people are racist” – of course, on some reflection these media types are removing nuance and creating binary division. This is probably the best way they can think of to maintain the status quo.

And this is the big, uncomfortable “elephant in the room” that White Fragility shows so well. You may not agree with all of it, but should be read – hopefully lead to introspection and change.

Such a great and unexpected source of advice and inspiration. This book is a memoir, but it becomes so much more when you read it. I wrote a longer review if you’d like to read more.

For 300 pages, There There is one of the fastest moving books you’ll encounter. The characters are drawn well, and the Native perspective feels vibrant. This was a joy to read and didn’t offer all the answers (much like life, I guess). The great thing here is that There There makes you interested in the characters. You really care what happens to them.

Jumping into the world of fiction and fantasy doesn’t happen often for me, but this time I picked a great one. At 245 pages, Piranesi is not a long book and what is there , moves fast. In fact, when I was done with this great novel, I wished for much more. I wrote a longer review of this great book here.

That’s it for 2020. It’s been a tough year for everyone, so I have such gratitude for being able to read more than one hundred books. If you’d like to see what I managed to read this year, take a look at my Goodreads profile.