It really isn’t easy for a little guy to get by. Allmyapps looks to be a Windows-Based application store more like iTunes than Ninite – but they really didn’t get any help when they went to Robert Scoble, and I guess I don’t blame Robert. A Windows app store? It seems like the guys at Allmyapps even know this themselves. Seeing all this, I was interested in the product itself – so I took some time to get to know it. The first try didn’t go so well since I couldn’t even install on Windows XP without an error.

First, a problem.
I wanted to test Allmyapps inside of a virtual machine, but the installer would fail and say “You must be connected to the Internet to install Allmyapps”. Imagine my surprise that I couldn’t even install the client. So, I took to Twitter in the hopes the they may be interested in solving this problem – I was happy to help out. So, I sent this tweet (and they responded): 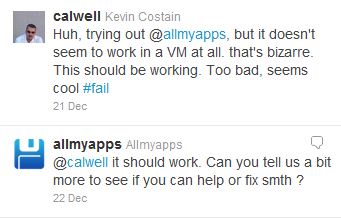 I thought, great, I can give them an idea of what’s going on with this problem. I then went to my VM and created a video of the screen for them. Take a look at this (best to view it in full-screen):

The Answer
After another day or so, I get another Tweet from possibly an engineer at Allmyapps  saying they found the problem – and this was indeed to the solution to getting Allmyapps past the above error:

Another Problem
So, they got the first problem fixed, and I could run the installation. But, after the installation (and on every boot of Windows XP), I’m presented with this error – presumably in “system.missingmethodexception” – I was starting to get the feeling no one actually tested this on Windows XP? Is that possible?: 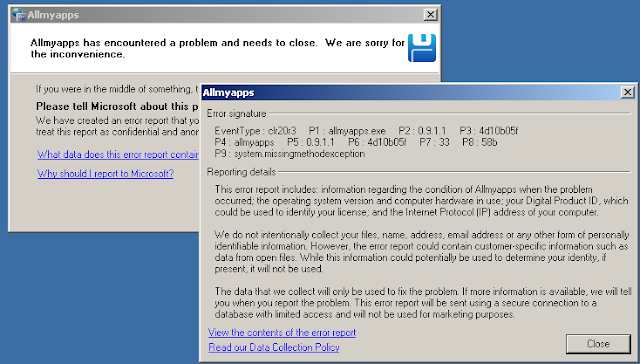 Diving deeper into this, I found a document that Microsoft posted on MSDN about this and they say:

This exception is typically thrown when an attempt is made to dynamically access a deleted or renamed method of an assembly that is not referenced by its strong name.

Huh, calling a method that doesn’t exist? It’s possible they are calling a function that only exists on Windows Vista/7 and not XP? Given all these details, I went back on Twitter and try to pass on this info. 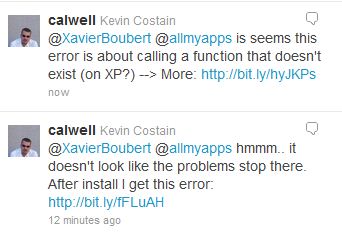 Finally, a Fix
As this continued, I really, really couldn’t let it go. This was driving me nuts! I decided to take a computer with Windows XP and  test Allmyapps – it still failed. I hen took a computer with a lot of software installed (and running Windows XP), viola! It worked. What was different?  As it turns out, what was different was that .NET 3.5 Service Pack 1 had to be installed. If the Allmyapps installed doesn’t see it, the default is to only instal .NET 3.5. With this, I finally tweeted to the guys over at Allmyapps.

Of course, I wanted to give them a better picture of what was going on here – so I made a series of videos showing how this problem looks and what happens after you install the .NET 3.5 Service Pack 1, Check it out (best in full-screen):

My hope is that they fix the installer to include  the above two updates so the Allmyapps runs seamlessly. Windows XP is an important platform to support.

On another note, this is all happening and I haven’t actually used the utilities or the Application Store. Now that I have this working, I’m going to try at the actual utility itself and how it compares to other offerings like Ninite. Stay Tuned.