Being that of a geek, or at least one who needs a fairly constant Internet connection to operate CWL  – I am very interested in the state of Internet access in the towns and cities visit. One such location that I often find myself in is Puerto Plata, Dominican Republic. Every time I return, the options improve- sometimes in major ways. Here’s  how my recent trip in December 2011 went connection-wise.

Phone Call / Cell Phone
Since I forgot to actually unlock my phone from Toronto – I was left without the ability to use my phone with local service. This was a bit of a pain in the beginning, but I soon moved to other options as needed = which mainly consisted of asking others to use their phones. The most common scenario to make phone calls to Canada was using a laptop with a VPN HotpostVPN ($8.88/month), Google Apps calling (free), and a pair headphones that supported the microphone/speaker split. While the calls required a higher bandwidth than I had (in some cases), I managed to get all the calls made with a very minimal cost. Some of you may wonder if I used Skype. Not even once.

Internet (Wifi)
I still found no Wifi options in the airport here in Puerto Plata. I do expect to see something with all the current expansion and construction, but for now, nothing. In town, Internet options are available in various places. I heard that Sam’s Bar & Grill had a good connection, but they were currently undergoing renovations, so that option was out.

Without Sam`s Bar and Grill – a local directed me to an alternate location called Polanco. It wasn’t far from the central square and the Wifi was free. The caveat though, is that you’ll have to at least buy a 50+ peso coffee (and refills are 40 pesos). The connection was good quality and the key was simply the phone number, or 8095869174 –  of the location – all clearly labelled on signs throughout the place (you just use the numbers, no dashes as the sign shows). power outlets were limited here, but the waitress was nice enough to move me close to one.

A connection was also possible in the supermarket called Jose Luis (closer to the Burger King). There is a small cafeteria upstair with a number of seats throughout. I saw a few power outlets and thought this wasn’t  a bad spot to sit an eat and do some work. I wasn’t able to test the connection itself because I didn’t have a device with me.

In the barrio (Cristo Rey), I didn’t find any usable connections. As people are quite poor here, the options are limited – but I’m coming across more and more folks that need computers fixed and maintained so that does bode well for an increase in Internet connections.

3G Modem Access
As described in a previous post, I was able to get Internet access by way of a 3G modem and local SIM card. When I leave the country, I just give it to a friend and he keeps using it and recharging the service while I’m away. The speeds of this connection are quite limited and when up in the mountain susceptible to wall or weather interference – but it does often work well and can handle streaming TV shows and movies if you’re patient. In one case, I was able to make a phone call on this connection (though I had to be outside).

You’ll find the biggest issue with this (beyond speed) is the fact that the connection will “cut out” for short periods of time. 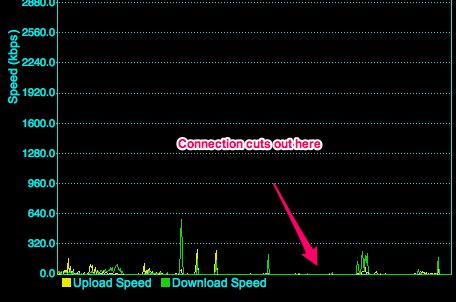 These sort of moments of connection loss may lead to cancelled downloads or problems with streaming services if the other end is not running on a robust system. I can say, however, that since the last time I was in Puerto Plata – the connection reliability and range has improved noticeably.

So, that’s the rundown. I would love to hear from others in Puerto Plata about their experiences getting and maintaining connections here. I will endeavour, in the future, to describe the process of creating a routed 3G connection (and Wifi access) and possibly, in the future, look at setting up a monthly planned Internet connection. Stay tuned and thanks for reading!