Don’t get me wrong, Dropbox is great. You get a free 2gb allotment of space, you get a free sync tool that can run on your PC or mac device and there are apps galore for access to those files. The many things you can do with Dropbox are underscored by some of the services that are out there – like Dropbox Automater, a sort of IFTTT for Dropbox. Sure, Dropbox has had some bad press over the last year, but as a service, it’s pretty amazing. Thanks to a new tool called Insync, there is an interesting alternative now.

Platform Support
One of the stronger arguments for Dropbox is the platform support. With Insync, you’ll not only have the tools they provide (currently Windows, Mac, Linux coming), but you’ll also make use of the platform tools provided by Google on Android and iOS. Dropbox is currently in the lead, but the platform options are actually impressive right now with Insync.

I found that the sync tool provided by Insync was less robust than what Dropbox offers (both in terms of upload speed and notification). In addition, the options available in the Insync tool work not as powerful (such as syncing only one folder). You’ll also find that the Dropbox website is better at handling files and sharing – but all of this will improve over time. In some cases, the no-frills options make more sense.

With regard to the force-naming of the folders (in the case of Dropbox – it has to be named “My Dropbox” or “Dropbox”), Insync looks the same way, forcing you to accept the use of a top-level folder named “Insync”.

Use Cases
1. Side-loading Android applications – Dropbox really does excel at simple things like this. If you have an Android device and want to do it with Insync, just load Google’s Docs application from the Android market and then you can place APK files in a folder and sync and download without issues. For scenarios like tablets that don’t support Google’s Accounts, you’ll still be forced to use Dropbox (or place the APKs on sdcard storage). Good (mostly)
2. PDF article printing and reading later – Dropbox is also great for this too – from whatever PC or Mac you use – if you see a web article you want to read later – just print it to a PDF and place it in your Dropbox folders (I use a sub-folder call reference). I can then open that PDF on any other device including Goodreader on the iPad. I’m happy to say that GoodReader will also sync with Google Docs and provide the same sort fo reading experience that you might get using Dropbox.  Good

3. Public Sharing – Dropbox and Google Docs have similar sharing options. In fact, Google’s Docs offers more if you include stuff like collaboration. Good

4. Quick File Movement – Another amazing use of Dropbox is when you work on drivers. You may have Internet access but can get to the file you want (perhaps the file’s on a remote computer). You can remotely upload that file to DropBox and then download it from Dropbox’s web interface. As things exist now, Dropbox is the better interface for this type of use-case. You’ll be limited by Insync’s interface as far as uploading and there is no option to download from the web. All file operations will be diverted to Google Docs which can do all fo that, but it will slow you down. Needs Improvement

4. Alternative Sync Options – Dropbox has also been around so long now, that you can get tools on various mobile platforms to sync specific folders inside your Dropbox folders to the device. Apps liek the already mentioned Goodreader and Dropsync on Android really round out the cloud storage options (and allows for stuff like local encrypted databases like keepass always up-to-date). While Goodreader does sync with Google Docs – nothing like Dropsync exists for Google Docs (that I currently know of). I don’t think it’ll be long though – as the Google Docs storage platform starts being used more like Dropbox. Needs Improvement

Costs
Another major consideration is pricing for the space you get. Here’s a look at what you can expect right now with each of the services: 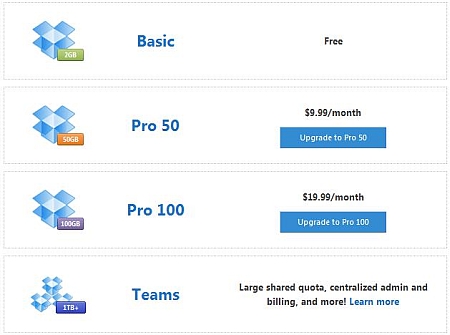 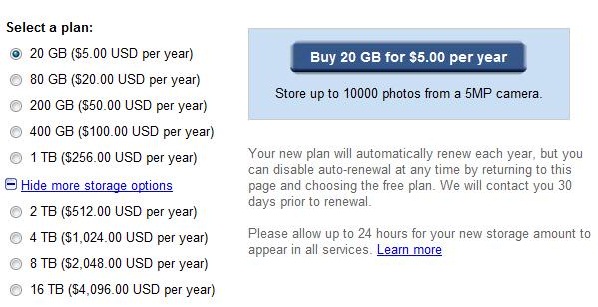 2. Goodreader (iPad) Sync – Files in Dropbox can be synchronized bidirectionally (files deleted on the iPad will be removed remotely from DropBox). Files stored in Google Docs can only be downloaded.

If you were looking to add some real storage or cheap storage, Google Docs has the serious advantage over Dropbox. Given your own use cases, the Insync tool may be able to replace Dropbox and you’ll have Google’s online document editing as a happy added bonus too. This may be worth making that switch. I would love to hear more from others that may have attempted to do so. How are you using either tool?