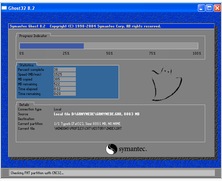 Since as long as I can remember working on computers, there have been drives and drive systems. As long as we’ve had to work with drives, we’ve had to have a way to copy the data off those drives onto another drive or possibly into a file. Back in the day, we used to try copying all files off an drive and then write the MBR, but we knew there was a better way to work with drive data. As I look at Wikipedia’s page, it seems that Ghost has only been around since 1997 when it could only image a single partition. I’m sure when it was released, Ghost was a huge hit with IT guys and tech enthusiasts everywhere. Over the years, this application has changed quite a bit – but the core of what Ghost does is still all the more useful. That’s why Ghost deserves to be on the list of THAT great tool.

And really, Ghost has been one of those tools that has always appeared to disconnect from it’s developer and become a life of it’s own. If you recall the earlier versions of Ghost, they were a DOS application and were generally installed to the hard drive. One of the cooler things to do, however, was to place Ghost on a boot disk and run it from there, giving you access to all the drives on the system. This practice continues today with the Windows Preinstall Environment (Win PE) where the Ghost32 application can be run from this version of Windows and used to clone drives. The versatility of Ghost has always been incredible.

Today, for example, I saw an SATA drive with Windows Server 8 Consumer Preview (x64) running on a 128 GB SATA drive and the technician used Ghost to create an image file (about 18 GB in size). Then, he took that image file and dropped it on a 128 GB SSD drive using a USB external drive reader. For Ghost, this was a breeze. For other applications (Such as the useful, but not as good Runtime DriveImage XL), this kind of configuration would pose a problem because the destination drive is smaller than the source. Ghost will resize on partitions the fly, among other great features.

This is underscored by the disappointment many have when seeing recent versions of the product turned into a consumer-grade Windows backup tool. I’m not sure whether the most recent version of Ghost can even be pulled out of the rather large installation package and turned into the versatile tool that Ghost used to be. When installed, look for the “Offline” version or the “Bootable CD” to determine if that is still possible.

If you work with drives regularly, Ghost is an application you probably know well. And, if you don’t – you should get to know it. While other tools seemed to have only been made for the day, Ghost is one of the few that has been made so well that it can still be used now. Sure, you can’t find many places to use the DOS version of Ghost – and the newer versions do support more options – but, the quality of the tool is often underscored by how it can be used in scenarios that the developers may never have envisioned or even knew existed when the tool was written. I can see Ghost becoming one of those open source projects that is actively developed by the community because of it’s real usefulness, and because it deserves to be considered THAT great tool.