As consumption devices go, Android tablets haven’t really held a candle to the iPad. There’s a storm of positive reviews out there that say that the Nexus 7 is a tablet that can rival Apple and Amazon’s offerings, and finally I’ve been able to use it and let you know. On a personal note, I was looking forward to seeing a good Android tablet experience after trying some really crappy ones (yea, I’m talking to you Colby). In a word: Impressive. But, more than one word is applicable for this great little 7 inch tablet, so I’m going to try to add my particular thoughts to the mix about this tablet.

My Nexus 7 arrived almost three weeks after being pre-ordered in late June, that wasn’t the best timeline, but I was happy to have it in my hands. The box was indeed difficult to open – it seemed like this thing was packed tighter than anything I’ve ever come across. After about a week, it appeared as though stock dried up and, as I write this – the Nexus 7 is not being sold in any flavour in the Google Play store. On Craigslist, the device is selling for $300+ (for the 16gb version).

My Favourite Parts:
This is really the right size for a tablet. 7 inch does seem small for PDFs, but otherwise it’s much more portable and useful in size and weight than the iPad is at 10 inches. There’s no doubt that Apple will try to enter (and dominate) this tablet space, but for now, 7 inch has it’s best device in the Nexus 7.

The price-point is perfect. Lower than the iPad is most important, but at $209 CDN, $199 US entry-level pricing, this tablet can really get into the hands of all those folks who think the iPad costs too much. The move to sell the Nexus 7 at this price is sheer brilliance. With a $25 credit for buying the Nexus 7 now, the deal is even sweeter.

Video playback is great. High definition streaming or local video. The Nexus 7 has the power to play any of the videos I tried on the device. The only case where I saw the device sputter on playback was when transferring files and simultaneously watching video.

Getting at content is easy too. The addition of the Play store for apps, music and movies makes a very decent array of content available to users at reasonable (usually a less than $5) rates. This can only improve for users making the tablet a really nice entertainment device. Being able to play all these purchases on computers and Android phones later makes things very convenient too (especially for those of you who’ve hooked up a computer to a TV).

Chrome on Android is wonderful. Web browsing on this tablet is nice. So much nicer than other tablets I’ve used up to this point. I enjoy the support for tabs, alternate devices and the syncing of tabs. Coupled with Evernote, I really think this is one of the great consumption tablets.

With only one camera, and front-facing, it appears that video chatting is all you’ll be doing. Smart move by Google, I say. Taking pictures with a tablet doesn’t really make sense in my opinion. A good, forward-thinking move by Google on this one. Interestingly, there is no camera application on the tablet. In other cases, like the Facebook App, you’ll be able to take one-off pictures while messaging.

My sense of the battery is that it’s better.Better than other tablets I’ve seen, but not nearly as good as an iPad. While I didn’t run exhaustive test, I can safely say that this tablet won’t last all day on WiFi heavy use. I’d guess this falls into the seven hour range based on my experiences. The battery was interestingly difficult to charge without the provided AC adaptor. When using other different chargers (or even a computer with USB cable), the battery might hit 50-60% and stay there. The Nexus 7 charger was able to get me to 100%.

Integration with Google’s services is amazing. If you are blessed to have content on any of Google’s various services (like music in the Play Music service), the Nexus 7 is really a treat to use. The library and search options are tuned extremely well to using this content while connected. Of the standouts, the Calendar is nice with pinch zoom support and the Play Music service looks amazing when tilted into landscape mode.

The lack of LTE might be bothersome. I find that the ability to find WiFi anywhere is more of a reality, and tethering options are more prevalent – so this problem is somewhat negated. For the truly mobile experience, Google is going to have to add a mobile network support in future iterations.

My Not-So-Favourite Parts
Some will say I really do nitpick, but I did find some annoyances with this device: 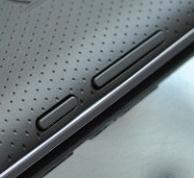 1. The power button and volume buttons are so close together that when trying to turn up the volume – I inadvertently locked the device. I would probably have placed the power up top or further away. This was confirmed when my 10 year old niece was playing yet another One Direction tune on Youtube – she went to increase the volume and instead brought peace by hitting the power button.

2. Playing some movies (like The Dark Knight in the play store) are met with horribly low volume. So low that I could barely hear what was going on.

3. The accelerometer didn’t work the way I wanted out of the box. I was rather giddy when the option to auto-rotate was found in “accessibility options”. I wonder why Google decided to keep this off for shipping.

4. And speaking of buttons, the decision to make the “home” button a soft key is somewhat annoying. When typing on the keyboard (just above the soft buttons) I found myself accidentally hitting the home soft button. This kills what I’m typing but also simulates what happens on iOS when an app crashes. The experience is grating. Google should probably change the button to something else or require a double tap while the keyboard is active.

5. The lack of an SD Card expansion slot is a shame, this device seems like it would truly benefit from one for those that carry allot of media.

6. Reading PDFs is not the best experience. In Acrobat Reader it was horrible. I settled on Repligo Reader and reading wasn’t too bad. It’s clear the iPad’s 10″ size works better for PDF documents.

7. More a Google issue, but Android applications seem to have no clear method of being identified as Tablet-Based. At least in the iOS world many apps are postfixed “HD”. In the Play Store, there appears to be no way to tell beyond what the app developer tells you (or the device support listing).

8. The email application is nice, but it was difficult to find the “Contacts” tool until I discovered it was named “People”. Otherwise, I felt it provided the basics well and was much nicer to look at in the larger form factor.

9. Some are saying the typing in landscape mode is easy, I found it to be just slightly too large for my (already) big hands to reach across – not to mention how big it would be for a smaller handed person. I think this tablet would really benefit from a thumb typing type of keyboard that iOS has.

Other things I’ve noticed
1. If you have a security lock enabled on the Nexus 7 and plug in a USB cable, the media folder won’t be visible until the device is unlocked (noticed with Windows 7).
2. There are four exposed metal contacts on the left side of the device. Could this relate to a dock? A screen protector device due to be released?
3. The rubbery backing is quite helpful when reading stuff with one hand. This device works nicely with the weight of the Nexus 7.

The verdict on this tablet is what you might expect, overwhelmingly positive. The combination of a truly useful size and the amazing price make this tablet a better value than the iPad. And, if the iPad didn’t have the edge in applications – this would be a better tablet overall. This is the device to get right now – if you can find one. Your move Apple.