I’ve gotta say, writing can be some of the most difficult things I’ve ever tried to do. Some of the stuff I’ve written can easily (by most means) be considered garbage. Making something coherent and readable takes a certain command of the language as well as having some sort of story to tell. This might have always existed, but I seeing more and more a rise in articles, posts and other online information written in a language that is english, but not quite completely english. From that, there is also the backlash that tends to arise – some of it downright nasty. I’m sure you’ve seen them too, the articles that look like they might be useful, but ultimately fail a substance test.

While perusing a Facebook group I rarely see, I came across the following post. It was a simple link away from Facebook to a site called Hacker News. Here’s what that link looked like from my perspective.

When I landed on Hacker news, the post was another link to a blog article (read that here).

While I didn’t immediately look at the article, some of the comments caught my eye. Click on the picture below to see a larger version. 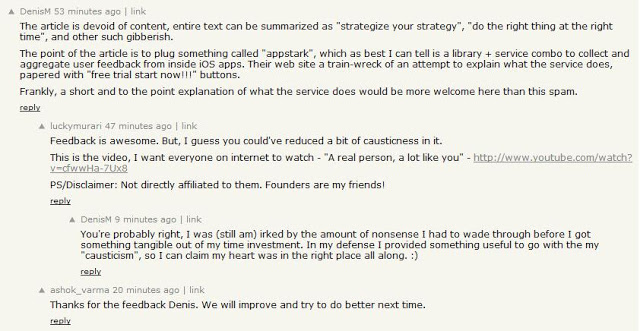 With all of this, I now had to read the article. What was this all about? Now, I don’t want to critique the article itself, but the above assessment by DenisM is not too far off the mark. The way DenisM went about his/her message may have been harsh, but perhaps some might think it had to be said.

The person who posted on Facebook and was defending this article on Hacker News is Lucky Murari, who is apparently not part of the company that made the article, but just a friend attempting to promote the makers of this tool called AppStark. The decision to promote this is a place like “Hacker News” may be an odd one considering the site’s not called “User News”. Beyond that – I find that, because everyone can seemingly post anything on the Internet, there is this flood of stuff that’s written in english as a means of promoting something or other, but it doesn’t quite have a point (other than, say, promoting something).

And, that’s not only the above example – in the months since this blog has offered to take submissions for “Guest” blogs on this site, there have been no less than three sent in. Each one of these posts have common characteristics that guaranteed they could not be published here. To be sure, publishing is what all blogs want to do. Every blog is starved for content. In that same vain, there seem to be a group of folks who are willing to take advantage of that interest in content and use blogs as a vehicle for promoting any sort of site or product they can.

The process is simple, they email you and say they would like to guest post, and in exchange for the article, they would like a simple link at the bottom of the page. This link is the lynchpin of the entire process because backlinks are of serious importance to popularity on the Internet. This link back to the site that sells what they offer is huge if you’re trying to get noticed by search engines.

The trouble comes in because this process is super spammy. Some of the things I can note about the blog  submissions received I’ve gotten over the years:

Now, I’m not going to post any of the submissions received – but it’s safe to say that they were all rejected by us thus far. The quest to find like-minded bloggers to write for this blog continues and our submission guidelines will continue to evolve in the face of what we receive.

The question is, what kind of trends are taking place in blogging? In 2012, blogging is so easy, free and accessible that all of this noise appears to be creating patterns. Here’s what kinds of patterns I see the most today:

Perhaps many of these strategies are sound methods of promotion, but they create a web of distrust and unnecessarily shallow information when the medium itself can offer so much more. When a post is considered, I think it’s important to make sure that something is being offered – analysis, curation, a new perspective, a solution, a story, an answer, help, shared experience. Here, there have some very important ideas about what should be on this blog.  Striving to help people see something new should be the goal of every post (even though most will fail in that regard) it should be at least attempted.

If you are a technology writer and would like to have your work published, I want to hear from you. Submissions can be made to info@cwl.cc and please do describe a little about yourself, where else you may have been published and we’ll work something out.