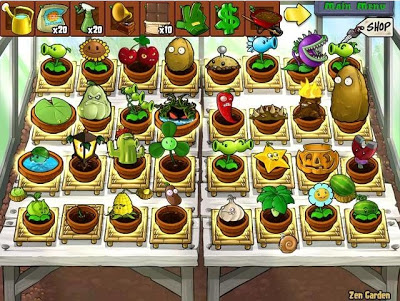 You might remember a post on this very blog talking about a game addiction to Plants vs Zombies, the very popular strategy game on many platforms. One of my first experiences playing the game was on an iPad, and then on the iPhone and, more recently on an Android phone and tablet. Since purchasing the Nexus 7 (review here), I’ve wanted to try to Plants vs Zombies again so I went to pick it up in the Google Play store. What I purchased for $2.99, however, was disappointment.

The root of my disappointment is in the platform gameplay differences with Plants vs Zombies. The biggest among the missing Zen Garden feature in the Android version of the game. If you aren’t familiar with the game, Zen Garden is a feature that is unlocked after you complete the 5-4 level of the Adventure mode. Once unlocked, the player as able to plant and water all sorts of things in day and night settings as well as collect tools for planting (such as a snail that picks up coins for you). This feature generally has the effect of making you want to play more as you watch the plants grow.

It becomes very apparent when you see reviews of the 1.3.5 version in the Play store. Many of the people playing the game are clearly aware of the differences between the platforms saying “not really worth it” or “it’s crap”. This is a huge oversight.

These kinds of differences highlight the issues when developing for multiple platforms. If you’re going to do it – the experience should be consistent across all platforms or users are going to feel cheated. The ability to build a Zen Garden has existed in the iOS versions of the  game since April of 2012 and still missing from Android in September of 2012. Perhaps they’ve just been working on Plants vs Zombies 2 and forgot about this? There are also more differences on platforms, a nice list of them can be found here.

I’m hoping in future incarnations of the game they work to make the experience consistent across every platform.